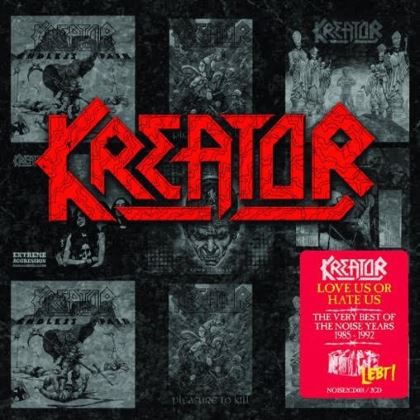 If you followed thrash from its infancy, the name Noise Records rolls through the mind as readily as Megaforce, Metal Blade and New Renaissance. The hallowed German imprint, founded by Karl-Ulrich Walterbach, exposed some of the most respected thrash, power, doom and experimental metal acts of the day. HELLHAMMER, CELTIC FROST, VOIVOD, OVERKILL, EXCITER, GAMMA RAY, BATHORY, TANKARD, SAINT VITUS, GRAVE DIGGER, CORONER, HELLOWEEN, THE GATHERING and HELSTAR are just a handful of the renowned metal acts who either launched or nestled at some point under the Noise umbrella.

It stands to reason that the revived Noise Records would choose thrash titans KREATOR, one of the label's highpoint acquisitions, as the first candidates in a "Very Best of the Noise Years" compilation series. These "Best of" compilations will come out via BMG, which acquired the defunct Sanctuary Records Group, prior holders of the Noise catalog, and will feature releases from HELLOWEEN, RUNNING WILD and KAMELOT. "Love Us Or Hate Us: The Very Best of the Noise Years 1985-1992" trails KREATOR's foundation years, beginning with the "Endless Pain" album and dropping into their botched proto-industrial venture that began with "Renewal".

An overseas double-disc version of this "Very Best of the Noise Years" compendium has already gone out of print. If you were fortunate enough to have scarfed up that far more comprehensive KREATOR installment, the remainder of this review will be mostly null and void as it addresses the U.S. single-disc version only.

What makes KREATOR one of the greatest all-time thrash bands—alongside their raging countrymen DESTRUCTION, HOLY MOSES and SODOM—wasn't as much how bloody fast they could go, it was about finessing their hurricane gales into something with verve to accent their brute muscularity. As Mille Petrozza would say, emending the band's party-minded lack of discipline.

The "Terrible Certainty" album from 1987 doesn't always get the respect it deserves as the game-changing vehicle it was for KREATOR. "Extreme Aggression", 1989, gets most of the attention—deservedly so—as it officially announced the band to the world as legitimate contenders against their American counterparts from San Francisco. Nonetheless, songs from "Terrible Certainty", such as "Storming with Menace", "As the World Burns", "One of Us" and, of course, "Toxic Trace", engineered a new method of thrash invention; one holding space for subversive musicality and signature changes without relenting intensity.

With only twelve songs making up the U.S. version of "Love Us Or Hate Us: The Very Best of the Noise Years 1985-1992", this floating overview of KREATOR does at least tap into the core root jams from the band. It hits on numerous songs that still haunt their set list today: "Endless Pain", "Extreme Aggression", "Flag of Hate", "Tormentor" and "Betrayer". For those who swear by 1986's "Pleasure to Kill", only "Ripping Corpse" checks in. The blistering title cut is not included, even though it has been played live numerous times in recent years. This is sure to miff some listeners, considering the monstrous "Pleasure to Kill" is rightly considered one of the greatest albums churned out of Germany, much less all of thrash. Likewise, you only get the title track from 1990's "Coma of Souls", KREATOR's official break into the major label market. This was courtesy of a joint venture with Epic Records that began with the album "Extreme Aggression". While not as stupendous as its predecessor, "Coma of Souls" is an important achievement in KREATOR's evolution, and it likewise could've used more attention on this bare bones compilation: especially considering the first five songs check in on the double album.

Instead, we're left with a couple of tracks from "Renewal": the title track and "Kharmic Wheel". There is enough relevance in these off-kilter, investigational tracks for re-examination, considering KREATOR, like nearly every one of their American and German thrash peers, were forced into slowing down and trying out new modes due to the pervasive, dictating North American market trends. There's enough punch and curious oddity to "Renewal" that it warrants another listen, but at the expense of far worthier material? That will remain subjective to the listener's depth of knowledge or desire to dig deep into KREATOR's vast thrash riches, since the U.S. version of "Love Us Or Hate Us: The Very Best of the Noise Years 1985-1992" can't even really be considered a primer to the band.

What's served up here is, of course, largely massive, but it hardly satiates. The liner notes from the illustrious Malcolm Dome dishes far more meat and sustaining background stories than this paltry playlist.