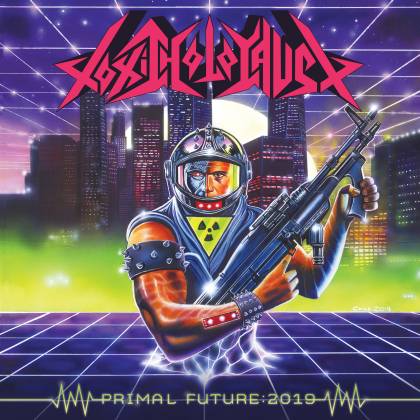 Has there ever been anyone more bizarrely underappreciated than Joel Grind? Ever since TOXIC HOLOCAUST emerged from Portland at the turn of the millennium, he has had arguably greater and more lasting impact on the underground metal world than any other musician: that tireless dedication to evoking the spirit of MOTORHEAD, DISCHARGE, VENOM and SODOM via the most stripped down and belligerent street metal bluster has cast its spell over every part of the dark metallic spectrum, from black metal's many rock 'n' roll acolytes through to the entire retro thrash scene that erupted, with additional help and inspiration from MUNICIPAL WASTE, in the wake of 2003's now-seminal "Evil Never Dies" debut. Tirelessly prolific, TOXIC HOLOCAUST have even pulled off the audacious trick of signing to a big label without instantly being denounced as sell-outs by whiny people on the internet. Frankly, if eOne Music can ensure that more people get to hear this fantastic band, then it's hard to see the move as anything other than entirely laudable. Far more importantly, "Primal Future: 2019" is no different in spirit or execution from its grubbier, lower-key predecessors: it just sounds bigger, more confident and, if anything, even more resistant to the vagaries of fashion than ever.

You can disregard the slightly flashier vibes emanating from this album's kitschy, sci-fi cover art. To some degree, TOXIC HOLOCAUST have allowed some sonic maturity to beef up their overall attack, but it's a superficial change and one that soon fades from relevance when Grind's trademark riffs build up steam and the whole thing takes off like a runaway Panzer, cheerfully crushing all before it. "Chemical Warlords" is a potent opener, all textbook speed metal clatter and hoarse BATHORY bark, and it's hard to deny that TOXIC HOLOCAUST have never sounded this muscular or unstoppable before, but the rawness that made them such an off-radar metal fixture has by no means been contained. Listen to the EXCITER-meets-D-beat rampage of "Black Out the Code" or the Lemmy-in-Hell punk 'n' roll of "Aftermath" and marvel at the sheer, stark purity of the whole thing. Much like DARKTHRONE, TOXIC HOLOCAUST have simply realized that you can be as calculated as you like, as long as the choices belong to you and you dish it out with maximum vehemence. Just because the likes of "Deafened by the Roar" and "Aftermath" are deliberately timeless, it doesn't mean they aren't still, you know, timeless. There are countless bands plundering these same basic elements at this point, but "Primal Future: 2019" does it all with the same unassailable fury and finesse that made this return-to-roots racket such a joy in the first place. If you want progress, look elsewhere. But if you want to hear some real deal blood 'n' thunder that would make Lemmy glow with paternal pride, Joel Grind is still the man to provide it.