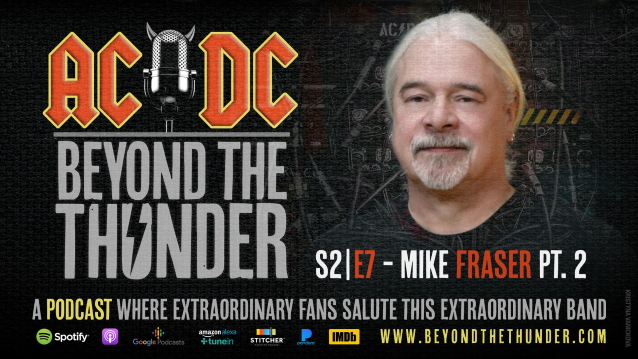 Halfway through 2018, Mike Fraser, Canadian record producer, engineer, mixer and AC/DC's go-to guy since 1990, witnessed the most authentic version of AC/DC gather for a clandestine recording session in Vancouver.

"I remember walking into the studio…and there's everybody there — the whole gang again," he said. "It was probably a good hour of hugs and high fives. What a feeling to have everybody back together again." After keeping the recording sessions a secret for nearly two years, the veteran engineer sighs a bit of relief: "It's a weight off my chest, for sure."

On part 2 of the podcast "AC/DC Beyond The Thunder", Fraser not only lifts the curtain behind the band's triumphant return and new No. 1 release "Power Up", but also takes on listener questions from around the globe, including fans from Argentina, Japan, Germany, U.K. and Australia, tackling both technical and recent band topics.

From the opening track "Realize" to the blistering rocker "Demon Fire" and swaggering "Wild Reputation", the podcast first dives into many of the album's new tracks, including the heartfelt departure "Through The Mists Of Time", a genuine tribute to AC/DC's rhythm guitarist and founder Malcolm Young.

"Kind of makes you tear up a little bit," admits Fraser, who says Malcolm's presence was definitely felt during the "Power Up" sessions, especially while recording the backing vocals, "On all their past records, Mal always sang on it. On some of those [new tracks], I could swear it's Malcolm singing."

All of the material on "Power Up", written by brothers Angus and Malcolm Young, stems from a well of previous demos, alongside a book of ideas and lyrics that Angus carried around in the studio, which Fraser says contains, "ideas all the way back to 'Highway to Hell', and before that. It's kind of neat seeing the wrinkled up pages from back in the heyday."

Aside from a dismal 2020, Fraser says that he has been re-energized by the absolute love of "Power Up". "It's been overwhelming seeing the love and respect that the fans have for the band. I'm very happy for the band and proud of the job they've done on this record."

"Power Up", AC/DC's seventeenth studio album, debuted at No. 1 on the Billboard 200 chart, marking the return of vocalist Brian Johnson, drummer Phil Rudd, bassist Cliff Williams, rhythm guitarist Stevie Young and lead guitarist Angus Young. As the fastest-selling LP of 2020, this is also the band's first collection of new material since the death of Malcolm Young in 2017 and serves as a tribute to him.