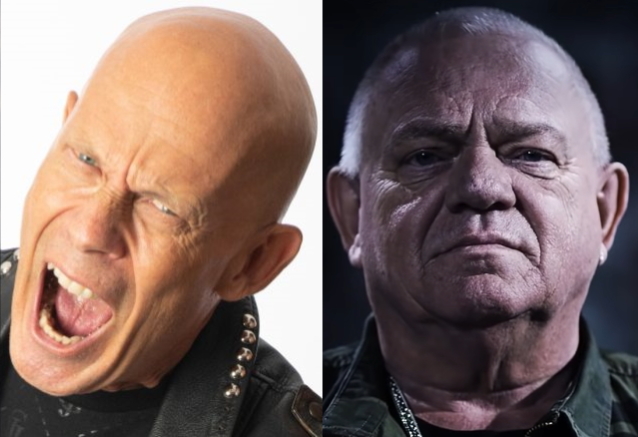 In a new interview with Zisis Petkanas of Greece's Rock Overdose, ACCEPT guitarist Wolf Hoffmann spoke about his long-lasting working relationship with singer Mark Tornillo, who joined the band in 2009. He said (as transcribed by BLABBERMOUTH.NET): "I think it just proves what I've always felt. It's a partnership, and unless you have the right partner, yeah, it's not gonna work. It's almost like a marriage or something. Just because it didn't work once with somebody else doesn't mean there's not the right person out there somewhere, and I think we found that right person. And he's got the right voice, he has a great attitude, he's got the looks, and he's a total metal freak. So I think we just have a winning team here."

When Petkanas asked Hoffmann about original ACCEPT singer Udo Dirkschneider's comment that the band's current lineup is "not ACCEPT" anymore because Wolf is the only remaining original member left, the guitarist responded: "Yeah, yeah. Of course. I know. What else is new? Of course he's gonna say that. What else is he gonna talk about? See, that's the thing — if you constantly talk about something that happened 30 years ago, what does that tell you about your own career? That's all I have to say about that. I always think the proof is in the pudding — make some great music and the rest will sort itself out. And that's all we're trying to do. We're not trying to compete with anybody. We don't have to prove ourselves. We are ACCEPT and we make great albums. That's all I know."

Last month, Udo said in an interview with Australia's "Scars And Guitars" podcast that he has had no contact with Wolf in recent years. "And I don't wanna have any contact with him," he added. "I'm really good friends now again with [former ACCEPT bassist] Peter Baltes; he did all the bass guitars on [my new] cover album ['My Way'], for example. I still have a good relationship with [ex-ACCEPT drummer] Stefan Kaufmann. Over the years, he was the guitar player in U.D.O. [and] he was producing U.D.O. and stuff like that. And the only guy I don't wanna talk to — let's say it this way — is Wolf. There's a lot of reasons why. I wish him all the best. [He's] a great guitar player anyway, but for me to work with him again — never."

During the same chat, Udo was asked if he has ever had an opportunity to meet Tornillo. Dirkschneider said: "There was a festival, Masters Of Rock, happening in the Czech Republic, and I was a guest singer of LORDI — I did a song together with LORDI. And LORDI was headlining and ACCEPT was the special guest of this festival, not the headliner. And at the hotel, we [Mark and I] were waiting both for a driver, and he never said to me hello or something like that. Okay, I mean, what can I do? Why not say hello? I'm also really good friends with David Reece who did [ACCEPT's] 'Eat The Heat' album. We are really, really good friends; we talk sometimes on the phone and blah blah blah. I don't know… What I heard from Peter is that it was not allowed that he talk to me. Don't ask me. Forget it…"

Udo added: "He's a good singer, he's doing a good job now with ACCEPT, and I wish him good luck. And maybe one day [we will meet and speak to each other]. You never know."

Dirkschneider's long-running metal band U.D.O. released an album in July 2020 called "We Are One", featuring contributions from Baltes and Kaufmann. Baltes and Kaufmann also reunited with Dirkschneider in the studio to record an EP under the DIRKSCHNEIDER & THE OLD GANG banner, titled "Arising", which came out in August 2021.

In January 2021, Hoffmann was asked by SiriusXM's "Trunk Nation With Eddie Trunk" if he was surprised to see Baltes working with Dirkschneider on some new music last year. He responded: "Yeah, I probably shouldn't say much about that. Again, I can only speculate what that was all about. At the end of the day, we do our thing, and everybody has to know for themselves what they wanna do. Yeah, let me not say as much about that as I can, please."