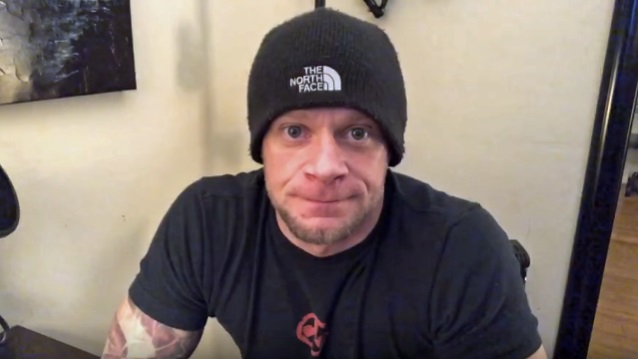 ALL THAT REMAINS frontman Phil Labonte has weighed in on the gun control debate, less than a week after a shooting at a Florida high school left 14 students and three teachers dead.

The attack in Parkland was the deadliest school shooting since the 2012 rampage that killed 26 people at Sandy Hook Elementary in Newtown, Connecticut.

In a seven-minute video message posted on YouTube, Labonte offered his thoughts on the gun debate, expressing his belief that a ban on semi-automatic rifles would not reduce mass shootings and insisting that this nationwide crisis of firearm injuries and deaths would not be solved by a formal change to the Second Amendment.

Labonte said in part: "The debate's frustrating, at least on the Internet, because you've got people that don't know what they're talking about saying, 'Do something.' Well, what is the 'something'? If it's just to pass laws, what are you gonna do? What's the law? So people say, 'Well, ban the AR-15 [assault rifle].' Well, [the gunman in the] Virginia Tech [shooting], he used handguns, and there was an assault weapons ban when Columbine was done, and those are just two right off the top of my head that I know they didn't use an AR-15. So then people say, 'Well, [ban the] semiautomatics. No one needs a rifle. They're for the military.' Well, most of your handguns are semiautomatic — most of the modern handguns. Sure, there are revolvers out there, but the vast majority of handguns that people carry or have in their home for self-defense, they're semiauto. And again, Virginia Tech and Coumbine — semiautomatic handguns. A semiautomatic pistol is gonna be able to do the same thing that a semiautomatic rifle is gonna be able to do. So you try to talk about it and explain that to people, and the only thing they wanna hear is, 'Okay, we're gonna do something.' But what is that something? If the 'something' is you wanna ban a certain type of gun, it's not gonna fix anything, it's not gonna stop the problems that we have with people attacking soft-target schools and stuff.

"One of the things that drives me nuts about [the latest Florida shooting] is everything failed. The FBI failed, and there was a police officer who was armed on the campus. He wasn't there. The kid got his guns legally. What do you do when everything goes wrong?

"I don't know that this is gonna help anyone, help their opinion, but if you're talking about doing something, look, if you're serious about it, you're gonna have to be able to amend the Constitution, you're gonna have to get rid of the Second Amendment, you're probably gonna have to get rid of 350 million guns," he continued. "It's not gonna happen. You're not gonna get people to turn in their guns. People talk about Australia and their confiscation, their buyback, whatever the program… you wanna call it. I think it's something like two-thirds of the people in Australia just kept their guns and kept quiet about it. I suppose if they go and shoot, they go out in the outback, in the desert or whatever, if they do. I don't know how they get their ammo or whatever, but they're still out there. And in America, where there's way more people and there's way more guns, you're gonna have results that you're less than happy with.

"I'm not saying that I know the answer, 'cause I don't," he added. "But I do know that there are people out there that have ideas that are good and worth listening to, and they're usually people that understand guns a little bit, there's people that are actually looking for a solution and understand. A semiauto is a semiauto. If you ban an AR-15, it's not gonna do anything. And just passing a law just to pass a law isn't a good idea, especially one that weakens the Bill Of Rights. I think the Bill Of Rights is important. The government has been doing too many things that infringe on people's rights, and that's not just about the Second Amendment.

"I'm sure if you follow me on Twitter or on Facebook, you've seen me talk about civil asset forfeiture and how horrible I think that program is. I'm not a fan of the Patriot Act. I don't like the NSA spying. I don't like the idea of the federal government being able to just snatch up people without due process. And I don't think that empowering the government to just confiscate guns just because is a good idea. And I understand that nowadays, or specifically now, although it's not a popular opinion."

Labonte, a staunch gun-rights advocate, in 2012 penned his own op-ed piece for Alternative Press supporting the Second Amendment rights of Americans to bear arms. He wrote at the time: "The Second Amendment is a right that was given to us to prevent the federal government from becoming tyrannical. Proponents of gun control would do well to learn the history of gun control and the terrible tragedies that often follow the disarming of a population."

Good morning!!! Heading to the gym this morning, you got anything cool going on?