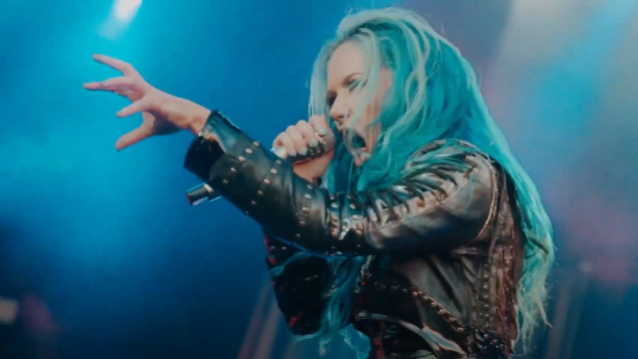 ARCH ENEMY has released the official music video for the song "The Watcher". The clip was created by Jens De Vos of Panda Productions and was filmed at the Wacken Open Air festival on August 6.

"The Watcher" is taken from ARCH ENEMY's 11th studio album, "Deceivers", which arrived on August 12 via Century Media Records.

Speaking about ARCH ENEMY's decision to release more singles than usual this time around, singer Alissa White-Gluz told Duke TV: "I actually like singles anyways; I like that idea. As long as there's an album coming up, I like the idea of giving almost every song the time and attention that it needs, because when we're writing the album and recording it, every song gets an equal amount of time and attention. It's not like the two singles get more than the others; we dedicate ourselves fully to every song. So I'm happy to see more songs getting that kind of dedicated attention from the audience as well."

Added guitarist Michael Amott: "It's kind of exciting to release songs one by one with these videos and streaming on the DSPs and stuff. Actually, it's worked out very, very well. And we noticed now when we had our concert tour in North America that… we were playing three of the singles — 'Handshake With Hell', 'House Of Mirrors' and 'Deceiver, Deceiver' — and they went down super well; [they were] very recognized by the fans and people singing along and so forth. So it was really great."