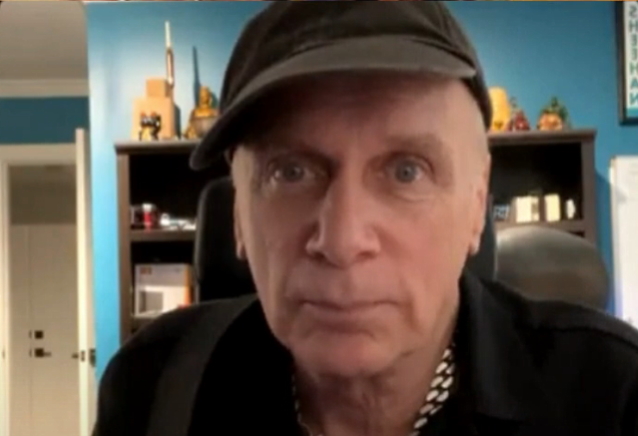 Billy Sheehan says that MR. BIG has found a new drummer and is hoping to play some shows again starting next summer.

The 69-year-old bassist made the comment while addressing MR. BIG's decision to go on hiatus following the passing of Pat Torpey. The drummer died in February 2018 at the age of 64 from complications of Parkinson's disease.

Asked in a new interview with Conversaciones Necias if there are plans for MR. BIG to return to the road any time soon, Billy said (as transcribed by BLABBERMOUTH.NET): "Yes. We wanna play again. [Former MR. BIG touring drummer] Matt Starr did an amazing drumming job. He's fantastic. He was friends with Pat. When Pat couldn't play his kit but still could tour, he toured together with Matt and they were very dear friends. But we need a guy that has Pat's voice. And Matt's got a great voice but it's a different range. We need a guy [who can sing] way up here," he explained while raising his right hand just above his head. "So we found somebody. We'll let the world know about it soon. And we're hoping to do some shows maybe in the summer 2023."

Earlier in the month, MR. BIG singer Eric Martin opened the door for renewed activity from the band while speaking to Chile's Radio Futuro. Asked if there are any plans for MR. BIG to get back together, Eric said: "If you asked Paul [Gilbert, MR. BIG guitarist], he'd go, 'Oh, well. I don't know. Never say never.' And same thing, Billy would go, 'Well, you know, it would be a good idea.' But I'm here to tell you that there is a rumor. Did I start this rumor? I don't know.

"I believe that there are big things coming," Eric said cryptically. "I keep saying that, and I want people to believe me that we're not down for the count. It's not over. I think we've got some things to do."

Martin said earlier in the interview that he still gets asked all the time if there is any chance of him reuniting with his MR. BIG bandmates.

"I miss MR. BIG; I really do," he said. "I've been waiting for MR. BIG to maybe do something for the last four or five years now, since Pat Torpey passed away. And even though I've been doing it for years and years, incorporating MR. BIG songs in my set and playing my solo stuff, I like playing the songs of MR. BIG.

"The band, we've been on kind of a permanent hiatus for the last four years — four or five years — and I miss playing MR. BIG songs," he added. "People ask me to play solo stuff all the time, but the majority of people love the songs of MR. BIG — from the hard, fast rockers to those little spluffy, warm and fuzzy ballads. They love it. So I give the people what they want."

This past August, Sheehan said that MR. BIG was "strongly considering" playing some shows in 2023. Speaking to Dr. Music, Billy said at the time: "We might do some MR. BIG [dates] at some point next year. We're not sure. Possibly."

Asked if MR. BIG has found another drummer to step in for Torpey after utilizing Matt Starr for much of the recording sessions on MR. BIG's last studio album, "Defying Gravity", as well as on the road, Sheehan said: "Possibly. We're looking at a couple of people. We loved playing with Matt Starr — he was really great — but we need a higher-pitched voice. Matt's a great singer but he doesn't have the range that Pat Torpey had. And to make everything sound the way it did, we're gonna need that extra thing there. So that makes it a little difficult for us and it narrows the field down. But there's a couple of people we might look into. But we still don't know."

Billy added: "After we did the shows without Pat — the first time after we lost him — again, Matt Starr did a great job. But it wasn't Pat; Pat wasn't there. So I'm glad we took some time — a couple of years — to just kind of lay off of it. But a lot of people write all the time and they really wanna see the band. We would like to play for them too. So we'll see. Nothing's for certain at this point, but we're certainly strongly considering it."

In May 2020, Sheehan gave an interview to the "Music Mania" podcast in which he claimed that a "mastering problem" with MR. BIG's latest album, "Defying Gravity", which came out five years ago, made the LP "unlistenable." He went on to say that "the label ruined the record" by insisting on having the album and "putting it out when it's not ready." He explained: "If we had another day to get it to proper mastering and get it done right, it would have been fine. 'Cause I was there for the final mixes — I went in there every day and listened to mixes. Pat was there with us too. We went through the mixes, and they were sounding great. And, unfortunately, we got screwed.

"I've seen it before in many other situations with many other bands," he added. "We've got the marketing department and they're ready to go and they've gotta have the record now. And then I've also seen other bands just say, 'No. The record is not done. You're out of luck.' And I wish we would have just said that, because I just don't think the record had the kind of life it had when I heard the final mixes."

"Defying Gravity" was released via Wowow Entertainment, Inc. in Japan and Frontiers Music Srl in most of the rest of the world.

After announcing his Parkinson's diagnosis in 2014, Torpey continued to write, record and perform with MR. BIG.

MR. BIG, formed in 1988, produced numerous hit songs that ranged across a wide array of rock genres — be it ballads, heavy metal, or blues rock. Their hits include "Alive And Kicking", "Just Take My Heart" and the chart-topping ballad "To Be With You".