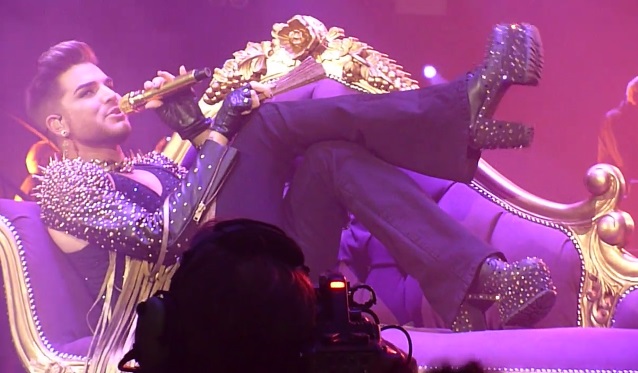 QUEEN members Brian May and Roger Taylor admit that their current collaboration with Lambert is a better fit than their previous involvement with legendary rock singer Paul Rodgers.

"He's sensational," Taylor tells Oakland Press. "I describe him as almost a camp Elvis [Presley]. He has this unbelievable range, 'cause [late QUEEN singer] Freddie [Mercury] had a great range. Adam can really cover it. He's an extraordinary singer and a real talent. I feel he fits into our sort of theatricality. It was very comfortable."

May adds: "One of the greatest things about Adam is that he's never an imitator. He finds his own way with the songs, and that's what we all want. We want our music to be alive and dangerous and still open to change. Freddie in particular would hate to have things reproduced the way they were. We take it to different places — that's exciting, and I don't think we'd be doing it if we didn't think we were actually going into new territory."

May also defended QUEEN against critics who don't think the band should ever play again because Freddie is no longer alive to front the group.

"People want to hear QUEEN music," the guitarist explains. "They want to hear it done great, and they want to have Roger and I play and we love to play. Neither Roger or I are desperate to go out and do what we did, because we did it. It's not like we're always looking for someone to sing for us. Organically, this happened with Adam. We just felt good about it, and we wouldn't be here if we didn't feel it was right and natural. So having this opportunity is great for me. We're still alive, thank God, and we're still healthy enough to go out and tread the boards one more time."

In 2008, May and Taylor, who had been touring with Rodgers as QUEEN + PAUL RODGERS, released the chart bomb, "The Cosmos Rocks", before calling it a day as a trio and a recording entity — despite a string of globally sold-out concerts.