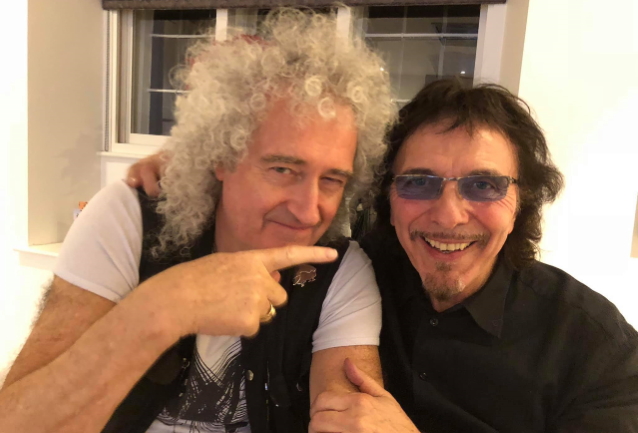 QUEEN guitarist Brian May has told Guitar World in a new interview that there is still "a chance" that his much-rumored collaboration with BLACK SABBATH's Tony Iommi will see the light of day. "We do more talking than anything else, but we do a lot of talking," Brian said. "He is really my dearest friend in the business and has been for so many years. I could write books about Tony because he's just the most [pauses]... I don't even know how to put it into words. You know, he's a luminous human being is Tony, with a wonderful, kind nature and an incredibly baffling sense of humour. And, of course, he is the father of heavy metal. He did that. He made that happen. And it's from his fingers and his mind. That young ex-welder, he made that happen. So, you know, he forever wears that medal, I think. He founded this stuff, heavy metal, in my opinion. I mean, I think probably most people would agree."

Back in 2013, Iommi told the Birmingham Mail that he was discussing a possible collaboration with May. The idea of working together came about when Iommi and May met up shortly after the BLACK SABBATH guitarist was diagnosed with cancer.

"When I was first ill, Brian May came to visit me at my house in Lapworth," Iommi said. "I played him some of my stuff, rock riffs that I'd never quite got round to developing, or decided not to use. He said I ought to do something with them.

"It's early days yet, and all my attention in on SABBATH for the foreseeable future, but we may well find some way of working together on them, and making them available in some shape or form.

"One of the ideas we had is that we could make the riffs available, get fans to use them in songs of their own, and see what they come up with. That way they'd effectively be recording with Brian and myself."

May elaborated on the idea: "I heard some of the hours of unreleased guitar jams Tony has on tapes and hard drives. I thought it would be great to make a compilation out of them. The idea was to put all these riffs out in some form so that people could build their own songs from them. You could make your own music with Tony Iommi on guitar. How great is that?"

A little over a year ago, Tony said he "found" about 500 riffs while spending time with Brian.