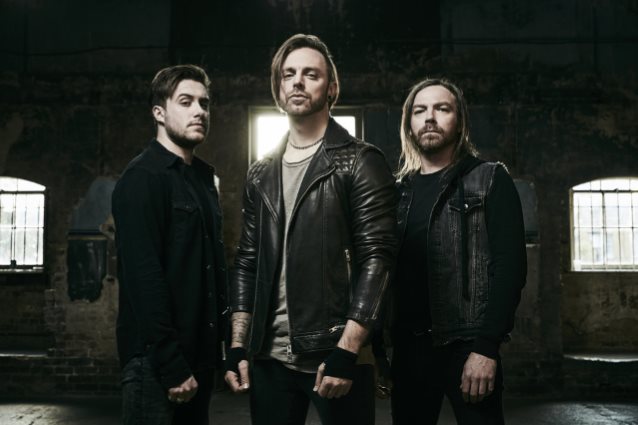 BULLET FOR MY VALENTINE To Begin Recording New Album In November

Welsh metallers BULLET FOR MY VALENTINE will enter the studio on November 6 to begin recording their sixth album.

The band writes on Instagram: "Final day of pre-production tomorrow before we head off to Mexico on Thursday for the final show of 2017.

"It's been an intense few months of writing, rewriting and demoing our asses off."

BULLET FOR MY VALENTINE guitarist/vocalist Matt Tuck told A Music Blog, Yea in June that the group's latest song, "Don't Need You", which was released as a standalone single last November, is "pretty much" a good indication of what fans can expect to hear on the band's next album. "There's some stuff in that vein, and there's a lot of other stuff we've been working which is… kind of a… not new direction, but we wrote two or three songs which are kind of a different sound for us, but we're really happy with, so we're gonna see how that goes, really," he said.

Longtime BULLET FOR MY VALENTINE drummer Michael "Moose" Thomas has not played with the group since early last year when he stepped away to spend time with his wife as they awaited the birth of his first child. He has since been replaced on tour by Jason Bowld (PITCHSHIFTER, AXEWOUND).

Final day of pre production tomorrow before we head off to Mexico on Thursday for the final show of 2017. It's been an intense few months of writing, rewriting and demoing or asses off. We start recording album 6 from November 6th. MT #bfmv #bulletformyvalentine #bfmv6 #getready 📸@ryancphoto