Sweden's BURST will release its new album, "Lazarus Bird", via Relapse Records on the following dates:

Two tracks from the CD — "Cripple God" and "(We Watched) The Silver Rain" — are available for streaming on the band's MySpace page.

"Lazarus Bird" was recorded at Studio Bohussound (STATUS QUO, ABBA) in Kungälv, Sweden. The follow-up to 2005's "Origo" was once again tracked with engineer Fredrik Reinedahl (OPETH, IN FLAMES, GADGET). Other songtitles set to appear on the CD include "I Hold Vertigo", "We Are Dust", "Momentum", "Nineteenhundred", and "I Exterminate The I".

Commented the band: "Expect an album that will NOT be 'Origo Part 2', but something new for BURST." 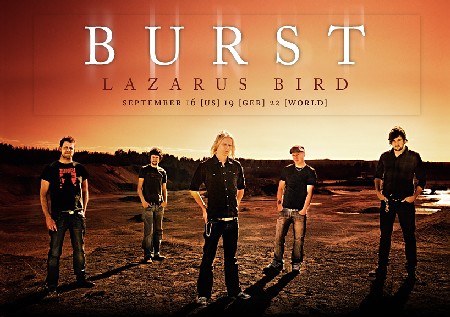 BURST's second video from its acclaimed "Origo" album, for the track "The Immateria", can be viewed below. The clip was shot in Stockholm, Sweden with director Robinovich of Robinovich Productions.