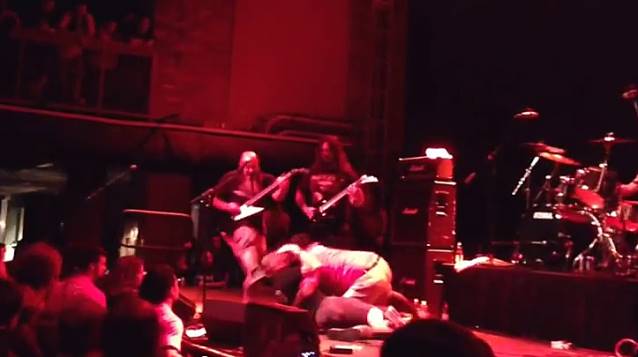 "In regards to the fan jumping onstage during our set at Maryland Deathfest. The Maryland Deathfest organizers/venue do not allow fans to run on stage uninvited. That's their policy. They had barriers and security in plain sight to prevent that. If someone chooses to go against their policy, I have no control over that and at a show like this I'm not expecting anyone to run onto the stage, especially during 'Planets Collide'. So I'm rocking out, my eyes are closed and then I guess security tackled the fan into me. I was already on edge having driven 15 hours straight through the night without sleep to play the gig. We had no backup guitars or techs with us so if we broke a guitar or even a string, the set would have been seriously delayed or ended. At shows WITHOUT security or barricades, if you decide to run on stage or dive off it, at least be respectful, get up and dive off and try not to hit into the band or break their gear and try not to break your neck or the neck of someone else. Thanks for understanding!"

CROWBAR frontman Kirk Windstein slammed a fan for almost breaking "every fucking tooth" in the guitarist/vocalist's mouth during the band's concert Thursday night (May 22) at the Maryland Deathfest at Rams Head Live! in Baltimore. The incident took place while CROWBAR was performing the song "Planets Collide" and a fan made his way on stage, briefly bouncing around and clapping, with the apparent intention on jumping back into the audience. It was at this point that a large security guard came rushing from the left side of the stage, tackling the fan and nearly knocking Windstein off the podium. The band continued playing for another 15 seconds or so before Kirk asked his bandmates to stop and addressed the crowd directly.

"Stop this fucking song," Windstein said (see video below; beginning around 2:25 mark). "I'm so sick of this shit. You've got motherfuckers like Randy Blythe — nicest motherfucking guy in the world. Some asshole goes into his office, fucks his fucking world up, and the guy almost goes to prison in a foreign fucking country. Do I go into your office and fuck your computer up? No. You know why? I respect you and I love you. Thank you. A lot of people think I'm a dick, go suck one, motherfucker. This is about respect. My eyes are closed, I'm playing my goddamn heart out. You could have broken every fucking tooth in my mouth. Thank you, security."