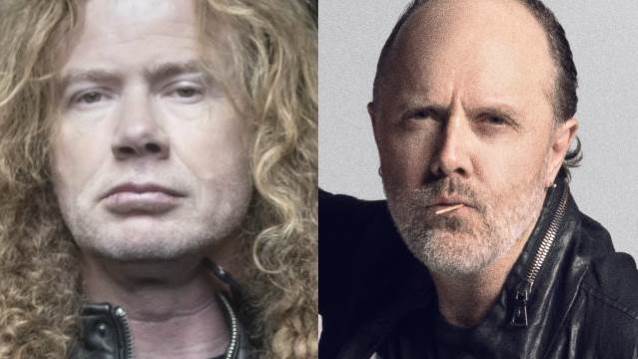 DAVE MUSTAINE: 'I Think LARS ULRICH Is Just Afraid To Play With MEGADETH'

Dave Mustaine says that the previously announced expanded version of METALLICA's 1982 demo tape, "No Life 'Til Leather" has been indefinitely shelved because he is unwilling to give Lars Ulrich "credit for something that not only" the METALLICA drummer "did not do but he was incapable of doing."

"No Life 'Til Leather" was released as a limited-edition cassette for Record Store Day in April 2015, available exclusively in independent record stores. It featured artwork copies from drummer Lars Ulrich's own personal copy of the original demo, as well as his handwriting. At the time, the band also promised that expanded editions of the demo, which had never before been commercially available, would arrive on CD, vinyl and in a collector's set.

The seven-song tape was recorded with the first lineup of the band that appeared live as METALLICA, including Ulrich, frontman James Hetfield, lead guitarist Dave Mustaine and bassist Ron McGovney. The original recordings were paid for by High Velocity record label owner Kenny Kane, with a view of making them available as an EP in 1982.

Asked in a new interview with Greece's Rock Hard magazine about the songwriting dispute that has led to the expanded version of "No Life 'Til Leather" being apparently scrapped, Mustaine said: "I'm not gonna give [Lars] my credit, so I'm not gonna be part of it. I wrote all of 'Mechanix', I wrote all of 'Jump In The Fire', so me giving any percentage of that to Lars Ulrich, he can pound sand. And as far as the song 'Phantom Lord', I wrote every note of that music, James [Hetfield, METALLICA frontman] wrote all the lyrics. That's 50/50. If James wants to give his percentage up to Lars because he's afraid of him, that's up to him. I'm not afraid of Lars Ulrich, and I'm not giving him my percentage. And the same thing with 'Metal Militia'; I wrote every single note of that music, James wrote every note of that lyric — that's 50/50. If James wants to give Lars his percentage, that's fine if he's afraid of him. I'm not afraid of him. I'm not giving nothing to Lars Ulrich. Now, they took it in the past [editor's note: apparently referring to METALLICA's 'Kill 'Em All' debut album, which features re-recorded versions of the songs from 'No Life 'Til Leather'] — everybody knows that — and the past is the past. But I could not willingly enter into a new agreement with these guys predicated on Lars getting credit for something that not only he did not do but he was incapable of doing — he was incapable of writing songs that good back then."

Asked if that means that there will never be another concert featuring the so-called "Big Four" of 1980s thrash metal — METALLICA, MEGADETH, SLAYER and ANTHRAX — Mustaine said: "Oh, I don't know about that. That has nothing to do with the 'Big Four.' I think Lars is just afraid to play with MEGADETH."

Last November, Mustaine tweeted that he was contacted by Hetfield two years earlier about "officially" releasing "No Life Till Leather" with "27 tracks, pics, the whole enchilada," but, he said, "the talks broke down because Lars wanted credit on two songs I wrote every note and word to. I have the texts. I passed."

Special thanks to Sakis Fragos, publisher/chief editor of Greece's Rock Hard magazine, for providing BLABBERMOUTH.NET with the original audio recording of the Dave Mustaine interview from which the above comments were lifted.