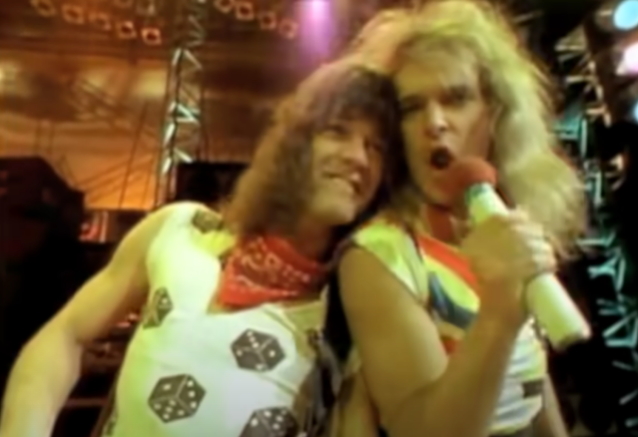 Mike Savage of the award-winning production agency Vision Savage Media has uploaded a music video for David Lee Roth's new solo song titled "Nothing Could Have Stopped Us Back Then Anyway". The track, in which Roth looks back nostalgically on his days in VAN HALEN, was reportedly recorded in 2007 with guitarist John 5 and original Roth solo drummer Gregg Bissonette for an album that has yet to see the light of day.

"Nothing Could Have Stopped Us Back Then Anyway" lyrics:

We laughed, we cried, we threw the television off that balcony
That memory means so much to me

No doubt in me, I do believe that no one listens to both sides except the neighbors
Fine art of compromise, happy losing half of mine 'cuz she'll lose her half later

Walk away
Walk away

Nothing could have stopped us back then anyway

"Once upon a time" is how a fairy tale sells it
"Sit down you won't believe this shit" is how the trucker tells it
Strike up the band, hire the piper we will pay

Nothing could have stopped us back then anyway [End of lyrics]

Back in 2020, Roth included five previously unreleased songs in The Roth Project, an online comic narrated by the legendary VAN HALEN singer, with music from John 5 on guitar and bass, Bissonette on drums, Brett Tuggle on keyboards, and Luis Conte on percussion. The tracks "Giddy-Up!", "Somewhere Over The Rainbow Bar And Grill", "Alligator Pants", "Lo-Rez Sunset" and "Manda Bala" were recorded more than a decade ago at Henson Recording Studios in Hollywood, California.

In a recent interview with Darren Paltrowitz — host of the "Paltrocast With Darren Paltrowitz" — John 5 stated about "Nothing Could Have Stopped Us Back Then Anyway": "It's about VAN HALEN. It's my favorite song that I've ever done with Dave, and it is beautiful. It's just absolutely wonderful."

John 5 went on to talk about the recording sessions for the unreleased Roth record, saying: "We had a great time. We had a blast — a lot of laughs, a lot of fun. I'm just so happy that I had that cool working vibe with Dave that we can just jump into the studio anytime and knock out some songs. And I'm very lucky 'cause not a lot of people get a chance to do that with Dave.

In August 2021, John 5 told AL.com that the rest of the unreleased Roth record is in the same vein as the songs that have come out, which have a singer/songwriter sound. "[Dave] wanted to do this kind of a more California sessions type of thing," the guitarist explained. "And he's such an artist, I was, like, 'Whatever you want to do, I'm there for you.' So it is that kind of vibe. But there's a lot of multi tracks and different acoustic parts that all work together. It's kind of orchestrated, if you will."

John 5 got his first big break playing on Roth's solo album, "DLR Band", before landing stints with Marilyn Manson and now Rob Zombie. His latest sessions with the iconic VAN HALEN frontman apparently took place at least eight years ago, with John 5 unveiling a snippet of the album during an interview with Masters Of Shred back in May 2019.