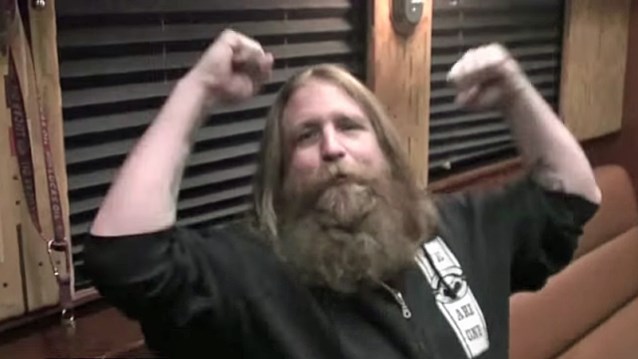 San Francisco Bay Area metal veterans DEATH ANGEL have been forced to cancel their appearance at the Metal Against Cancer event on February 28 at the 120 Tavern in Marietta, Georgia. DEATH ANGEL drummer Will Carroll (pictured) broke his foot in an accident and the band tried to arrange for a stand-in drummer, but with the lack of advance warning on the issue, they weren't able to make it work.

Said Carroll in a statement: "Two days ago I was taking out the trash, and in doing so, I missed a step in my basement, rolled my foot and broke a bone in my right foot.

"Doctors say I can't drum for three to four weeks. Because of this, DEATH ANGEL will not be playing the Metal Against Cancer benefit on February 28th.

"I was looking forward to this show for many reasons but the biggest one is the fact that I lost my mother to cancer 11 years ago so it was important to me and DEATH ANGEL to be a part of this great cause.

"This will also be the first show I have ever cancelled in the 27 years I've been playing live, so this is hitting me on multiple levels.

"We put the word out to a couple of drummer friends to help out, but they were unavailable.

"We decided there wasn't enough time to teach someone the set and make it presentable.

"The last thing we want to do is put on an unequal performance. People deserve better than that.

"We (especially me) apologize to everyone who bought ticked and to our fans who were expecting to see us. And to all the organizers, other bands, and everyone involved. Maybe we'll be asked to do this again — I certainly hope so."

The Metal Against Cancer is scheduled to go ahead, with performances by HALCYON WAY, ÜBERSTOUT, CHERRY BOMBS dance troupe, RIGORISM, BISHOP LAKE and KILLING GRACE.

Said Metal Against Cancer promoter and HALCYON WAY leader Jon Bodan: "We looked at postponing the event entirely, but the logistical nightmares that entailed made it impossible to do that. We ARE going to see if we can work something out to bring [DEATH ANGEL] back in the near future for another installment of the event.

"We, of course, wish Will all the best with his recovery and have no hard feelings at all towards the guys in DEATH ANGEL. They've been total professionals and easy to work with since we initially connected with them.

Bodan added: “With that said, the show must go on! We are going to continue with the show at the same time and place and blow the roof off it anyway.

"We hope you will all still attend and have a good time. There will be a lot of great metal that night, and we have a boatload of awesome stuff that has been donated for us to raffle off."