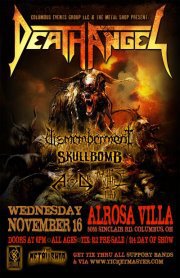 DEATH ANGEL guitarist Rob Cavestany says that he "doesn't really like" playing the Alrosa Villa nightclub in Columbus, Ohio because it conjures up images of late PANTERA/DAMAGEPLAN axeman "Dimebag" Darrell Abbott, who was shot to death on stage while performing at the venue in December 2004.

Cavestany and his DEATH ANGEL bandmates played at the 37-year-old club on November 16, 2011 on an "off" date during the band's recent tour with ANTHRAX and TESTAMENT.

Speaking to Joe Zelek of Steubenville Herald Star/Weirton Daily Times' "The Metal Corner", Rob stated about the experience of performing at the club, "It's actually the second time we played there since that unfortunate incident happened. And, to be honest with you, that has to have something to do with it, because it's a weird feeling playing there; it just doesn't feel normal. And I don't wanna say anything negative in the fact of… of course, we're fucking stoked to come and play in Columbus, [for] the fans and just to be there and play. But I don't really like playing there; it's too much of a thing. It's in your fucking mind the whole time, and it's a real dark and negative thing. And it's hard to feel festive there when that had happened there. And me, being the lead guitar player, to top it off, so I'm, like, tripping on, thinking about…. It's not like you’re sitting there fucking freaking out paranoid or scared like it's gonna happen again, but it makes you think of that and fucking the whole thing, and it's just a bummer, that whole thing."

He continued, "We're a real festive kind of a band; we like to have a fucking good time. We play heavy and violent shit, but it's, like, in a fun way — we're fun kind of guys and we don't just get up there and be all [makes growling sound]. I mean, we take out aggression in a fun, rock and roll night, and it just seems weird celebrating that kind of fun hoopla in a place that seems like it needs to be respected in a more serious way for what happened."

He added, "So it's a mixed feeling, but for that matter, we had a fucking ripping show last [month]. Because of that, I just fucking sunk into my playing and just fucking let it loose, like, really, really, really heavily; I fucking had an amazing show last [month]. I played really well, too. Sometimes you just play better on some nights than other nights, and I'm thinking of that, too. I'm like, 'OK, Dime… Let's play fucking good tonight.' So it was cool."

You can hear an audio clip of Cavestany talking about playing at the Alrosa Villa using the SoundCloud player below.

In 2007, Dimebag's estate reached a settlement in a wrongful death lawsuit filed against Alrosa Villa over the guitarist's murder.

Darrell's family members claimed in their suit that the owners of the Alrosa Villa were negligent in allowing 25-year-old Nathan Gale to enter the club with a gun and reach the stage, where he killed four people and injured several others before he was shot dead by an off-duty police officer.

The case was resolved when the Abbotts agreed to a "nominal settlement."

In a statement, club manager Rick Cautela said, "What happened here on December 8, 2004, was a tragedy for everyone and our hearts go out to the victims and their families. There is nothing we could have done to stop it."