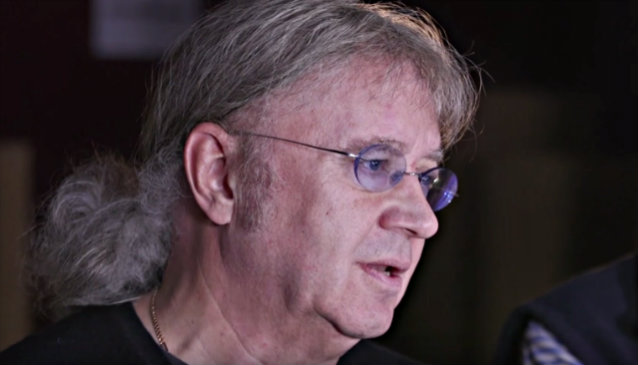 DEEP PURPLE Drummer On Being Inducted Into ROCK HALL: 'I Don't Need A Slap On The Back From Anybody'

Teenage radio host Miles "The Shoe" Schuman of the rock station WMOS-FM 102.3 The Wolf recently conducted an interview with legendary DEEP PURPLE drummer Ian Paice. You can now listen to the chat below.

Asked if being inducted into the Rock And Roll Hall Of Fame is as prestigious of an honor as it is sometimes made out to be, Paice said: "For the musicians, I don't think it really makes much difference. I think for the fans of those musicians, it's a very important thing. It reinforces their belief that the people they like and the music they enjoy is worthy of a mention. And I think on that level, it's a very, very nice thing to happen."

He continued: "Rock and roll is not Hollywood. Hollywood's [about handing out] awards every year, slapping each other on the back for just doing a good job. It's a bit schmaltzy, really, isn't it? And rock and roll is everything that that's not. And just 'cause we've been around for a while and made some records that have been successful, I don't need a slap on the back from anybody. I know what we've done, I'm proud of a lot of it, and our fans let us know what we've done. So that's it; I can't put it any better than that."

Regarding whether it was awkward being in the same room as some of DEEP PURPLE's former members during last year's Rock Hall induction, Paice said: "No. The old saying 'water under the bridge'… Lots of things are said in the past, lots of things are done. In hindsight, you could look back and say, 'Nine out of ten of 'em was stupid and it should have never happened,' but hey, life is like that. If you could make every decision correctly and do it logically and be sensible about it, life wouldn't be what we know it is today. So, Glenn [Hughes] and David [Coverdale] were there, and it was fine. We had a sitdown and a drink and a good laugh about a few things that we remember from the past and got on with the night."

DEEP PURPLE — which has been eligible for induction into the Rock And Roll Hall Of Fame for two decades now — finally entered the Rock Hall as part of the class of 2016. The band's first three lineups were inducted, including Paice, guitarist Ritchie Blackmore, late keyboardist Jon Lord, and various singers and bassists — Rod Evans; Ian Gillan and Roger Glover; and David Coverdale and Glenn Hughes.

DEEP PURPLE will release its new album, "InFinite" on April 7 via earMUSIC. The disc was tracked in February 2016 at a studio in Nashville, Tennessee and was once again helmed by Bob Ezrin, who has previously worked with KISS, PINK FLOYD, PETER GABRIEL, ALICE COOPER and KANSAS, among others.