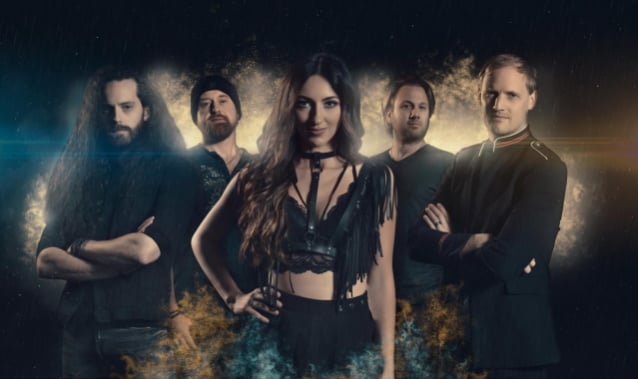 DELAIN will release a new album, "Dark Waters", on February 10, 2023 via Napalm Records. Emerging as a brand new start and safe haven alike, the LP, without any doubt, continues the legacy of the brainchild of keyboardist, founder and main songwriter Martijn Westerholt and contains everything DELAIN is loved for and more: a sonic rollercoaster ride of catchy tunes with explosive elements — ranging from pop to film score-inspired to blistering room shaking metal.

The track listing merges perfectly with the fantastic voice of new vocalist Diana Leah, showcasing her incredible talent and musical sophistication, which the brand new single "Beneath" manifests. The vocal department holds new adventures with guest singer Paolo Ribaldini, who also highlights the track as the ultimate hymn. Along with a stunning music video, "Beneath" takes the listener into a sinister underworld of the deep. Modern, synth melodies mix with catchy classical passages and ominous riffs throughout the song.

Westerholt comments on "Beneath": "'Beneath' is a perfect ambassador of the album and DELAIN as a whole because it encapsulates almost all of the recognizable DELAIN elements you will find on the album."

Along with Westerholt, original guitarist Ronald Landa and original drummer Sander Zoer bolster DELAIN's continuity, while new members — Leah and bassist Ludovico Cioffi — continue to evolve their sound. Songs like the previously released single "The Quest And The Curse", as well as "The Cold" (the latter featuring a real, epic choir),lure with a bombastic sound that skilfully combines orchestral melodies, epic heavy riffs and marvelous vocal performances. DELAIN magnificently manages to never lose touch with their characteristic sound, making them a constant without ever standing still. Pop-induced opening track "Hideaway Paradise" shows exactly that by inducing a dream-like feeling flirting with melodic metal guitars, while the ballad-like dark track "Mirror Of Night", featuring WITHIN TEMPTATION guitarist Ruud Jolie, entices the listener with unfathomably catchy lines and melodies. "Queen Of Shadow" merges the orchestral and synth-focused soundscapes DELAIN is known for as it weaves melodic heavy guitars that intertwine with orchestral lines and vocal melodies. "Tainted Hearts" is centred around Westerholt's keyboard arrangements, which skilfully showcase the creative roots of the mastermind. "Invictus" is nothing less than the magnum opus of the album — a rock opera in its own right with heavy riffing, choirs and vocal parts performed by Leah, Ribaldini and Marco "Marko" Hietala (ex-NIGHTWISH),ending in a bombastic climax where everything comes together.

This past September, Charlotte was asked in an interview with Spain's The Metal Circus TV how she felt about the fact that DELAIN recently made a comeback with a new lineup. Wessels said: "I'm trying not to engage with it too much, honestly. I've seen positive responses about it, which I think is good. But I do try to keep some distance and just focus on what I'm doing rather than checking that out, because I still don't feel like that will make me happier per se."