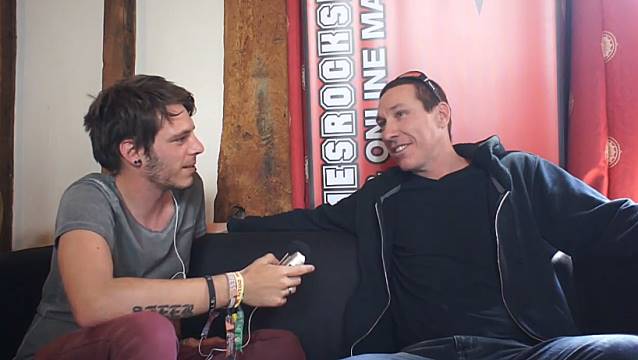 MikeJamesRockShow.com conducted an interview with DEVIL YOU KNOW drummer John Sankey at the U.K. edition of the Sonisphere festival, which is being held July 4-6 at Knebworth Park in Hertfordshire. You can now watch the chat below.

DEVIL YOU KNOW is the creative union of Howard Jones (ex-KILLSWITCH ENGAGE),Francesco Artusato (ALL SHALL PERISH) and John Sankey (DEVOLVED).

The band's debut album, "The Beauty Of Destruction", sold around 6,000 copies in the United States in its first week of release to debut at position No. 45 on The Billboard 200 chart.

DEVIL YOU KNOW supported BLACK LABEL SOCIETY on this year's Revolver Golden Gods Tour, which kicked off on April 16 in Portland and wrapped on June 7 in Los Angeles. Also appearing on the bill was DOWN.

The writing and recording process for DEVIL YOU KNOW's debut album "was surprisingly easy," stated Artusato. "When we get together, it just works." The band is also quick to sum up the studio vibe with producer Mader as "intensely creative," said Sankey. "Logan definitely helped us realize and define the DEVIL YOU KNOW sound." Jones agreed: "He went from producer, to unsung member, to friend."

"It's a different style of music for me," said Jones of DEVIL YOU KNOW's unique sound. "It's heavy as anything any of us are known for but I get to do some different things people won't expect. I've been singing almost all my life. Being around good
songwriters and musicians in my former bands really helped mold me into who I am now."