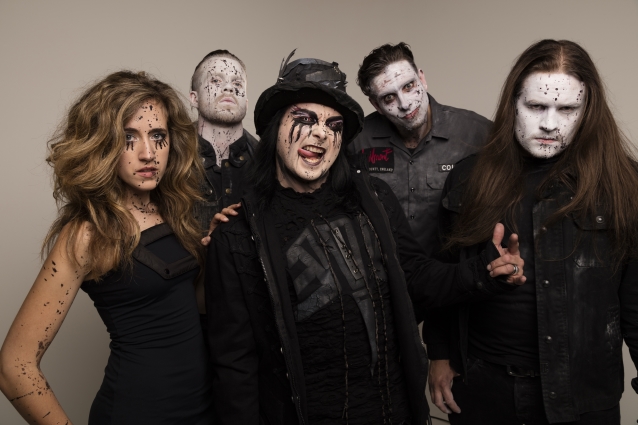 DEVILMENT Feat. CRADLE OF FILTH Frontman: 'Hell At My Back' Video

DEVILMENT — the British band led by frontman Dani Filth of CRADLE OF FILTH — has released an official live music video for the track "Hell At My Back". Check it out below.

The band states: "The live video for 'Hell At My Back' was taken from DEVILMENT's performance at Bloodstock 2017, which was an awesome show played at an awesome festival. We had quite a riot at Bloodstock that year, with some truly unforgettable moments courtesy of meeting bands and friends amid many alcoholic beverages. This was actually the last show for both Lauren and Nick, who left the band amicably not long after the show for commitments in the real world.

"'Hell At My Back" is a precursor to our forthcoming appearance at this year's HRH Metal III. Lyrically, the protagonist of the song is constantly haunted by his past, hunted by the horrors he has confronted since time immemorial. Awful things he has done in the name of love. But it is again another song of defiance, of staying the inevitable, of the eternal struggle of 'being.' Of evading the clutching powers of Hell."

"Hell At My Back" is taken from DEVILMENT's latest album, "II: The Mephisto Waltzes", which was released in November 2016 via Nuclear Blast Entertainment.