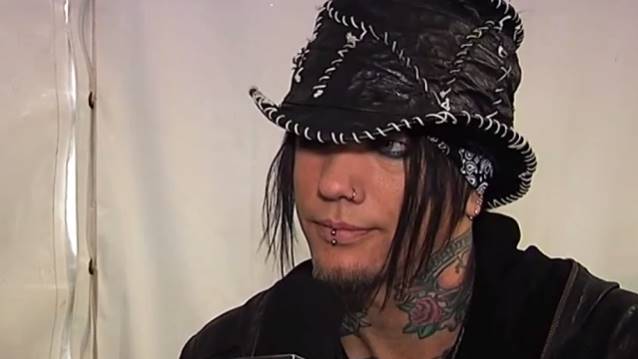 Nic and Big J of the Boise, Idaho radio station 100.3 The X Rocks conducted an interview with GUNS N' ROSES and SIXX: A.M. guitarist Daren Jay "DJ" Ashba at this year's Rock On The Range festival, which was held May 16-18 at the Columbus Crew Stadium in Columbus, Ohio. You can now watch the chat below.

On handling most of the GUNS N' ROSES interviews these days since Axl Rose is not speaking to the press:

Ashba: "It's a lot of extra work. [laughs] It's cool, you know. I wake up every day and I'm blessed to be in the shoes I am. I don't take it for granted, you know. Any day you could wake up and it could all be gone. So you just ride this crazy roller coaster called life, and that's kind of what I'm doing — just enjoying every loop and twist and turn in it."

On what it feels like playing with GUNS N' ROSES after being a fan of the band growing up:

Ashba: "I'm still a fan of GUNS — I always will be — and that's the only reason I'm in this band. I felt really connected to the band — I grew up cutting my teeth on the guitar style — so, for me, it was like putting on a glove; it felt natural. I turned down quite a few big gigs, and this is one that I just couldn't turn down. I felt like I had something I could offer. As a songwriter and producer, I feel like I can honestly bring something cool to the table for the future of this band. So that's why I'm here; not so much to play guitar."

On whether SIXX: A.M. will tour following the release of the band's forthcoming third album:

Ashba: "We're planning on doing some really cool new stuff — like something realy super-special for the fans. We're talking about touring, but not anytime soon, so instead, we're gonna do something that I think fans are gonna really love."

GUNS N' ROSES' last studio album, "Chinese Democracy", got mixed reviews and was a relative flop, moving less than one million copies in the U.S. since its November 2008 release.

Any chances of a new album, of course, depend on Axl Rose. It took Rose 13 years to finish "Chinese Democracy", burning through hundreds of thousands of dollars, multiple producers, every last remaining original member of the group and a few replacements before he was done.