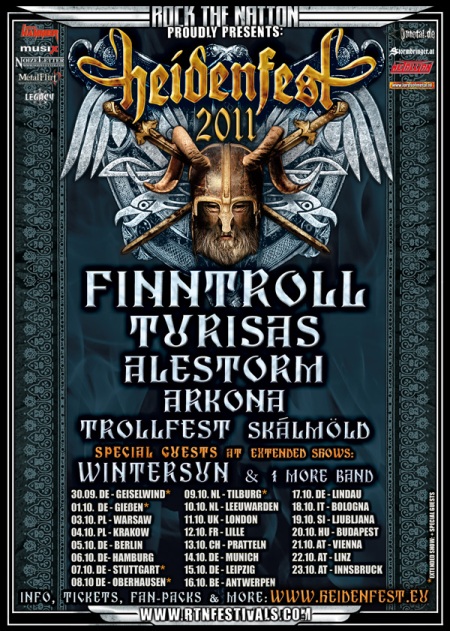 FINNTROLL, TURISAS, ALESTORM, ARKONATROLLFEST and SKÁLMÖLD will join forces for the Heidenfest 2011 tour, set to take place between September 30 and October 23.

For more information, visit www.heidenfest.eu.
"Stand Up And Fight", the third album from TURISAS, entered the official chart in the band's home country at position No. 5. The CD was released in North America on March 8 via Century Media Records. It was made available in the following formats:

TURISAS filmed a video for the title track of its new album, "Stand Up And Fight", on February 7 in the California desert with director Iain Sclater. Influenced by the film "Mad Max" and the band’s own image, the clip is sure to provide a thrilling new look at TURISAS in the band's first-ever U.S.-shot music video.

"Nifelvind", the latest album from FINNTROLL, was released in North America on March 9 , 2010 via Century Media Records. The CD was recorded at Sonic Pump Studios in Helsinki, Finland and was mastered by Mika Jussila at Finnvox Studios. The album cover artwork was created once again by the band's guitarist Skrymer.

ALESTORM will release its third album, "Back Through Time", via Napalm Records on the following dates:

The CD was produced by Lasse Lammert at LSD Studios in Lübeck, Germany.

"Back Through Time" will be made available as a jewelcase, mediabook, LP, and special-edition boxset "featuring bonus tracks and other mad shite!"