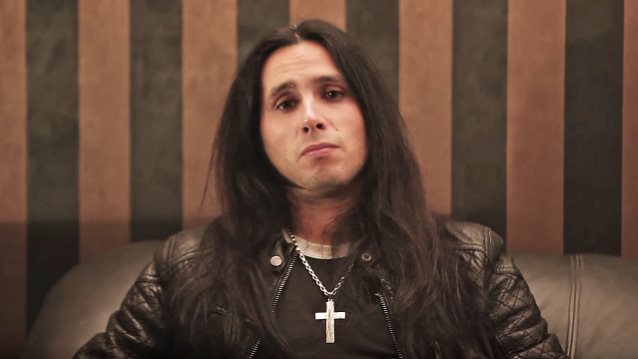 A track-by-track breakdown of "Immortals" by Gus G. is available below.

"Immortals" marks the first time FIREWIND used an outside co-producer, having worked with Dennis Ward (UNISONIC, PINK CREAM 69),who not only engineered, mixed and mastered the album, but also co-wrote it together with Gus G.

Gus G. said: "'Immortals' [is] the first concept album FIREWIND has ever made.

"Since we're from Greece, we thought it would be a cool idea to make a concept of Greek history and heritage. So on this album we focused on the legendary battles of Thermopylae and Salamis during the second Persian invasion of Greece in 480 B.C.

"The artwork was once again created by our longtime collaborator, Gustavo Sazes, and we feel it reflects the vibe we tried to capture on this album — epic, powerful, glorious, everlasting."

The official video for the song "Ode To Leonidas" can be seen below. The clip was recently shot with the iCode team (KAMELOT, DEVIN TOWNSEND PROJECT, MOONSORROW) in Serbia.

Gus stated about the song and the video: "As many of you have found out by now, our new album 'Immortals' is a concept and focusing on the battles of Thermopylae and Salamis. The song 'Ode To Leonidas' is obviously about the legendary warrior King of Sparta and his heroic battle with his 300 brave men against the massive Persian army invaders.

"For the production of the clip, we traveled to Belgrade, Serbia and filmed with iCode team (same team that directed my solo video 'The Quest' and so many other great bands) and we're really amazed by the end result. It's truly epic! We hope you will enjoy too. Heavy metal fans — unite!"

In addition to the standard jewel case CD and digital download formats, "Immortals" will be released as LP on 180-gram vinyl with a poster as well as the entire album on CD as bonus. Additionally, there will also be a limited-edition mediabook CD with expanded booklet, a bonus track and three stickers.

In order to support the release of "Immortals", FIREWIND is set to hit the road across Europe.

"Immortals" marks FIREWIND's first release with singer Henning Basse (METALIUM, SONS OF SEASONS),who previously toured with the band on various continents in 2007 and was most recently the singer in Gus's solo touring group.

Said FIREWIND in a statement: "Since [2014], [Henning] started playing some shows with Gus G.'s solo band and he delivered amazing performances, stunning the crowds all over Europe! Henning is an amazing frontman and a personality that totally fits with what FIREWIND is all about."