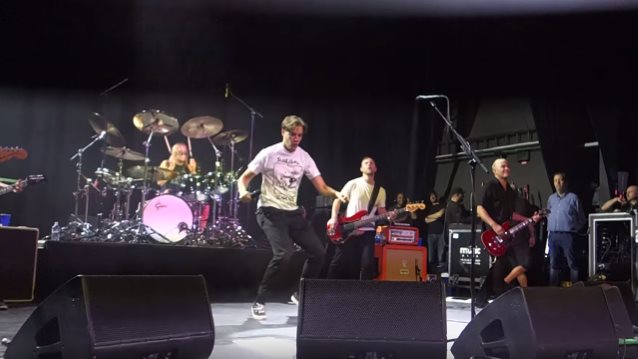 Howlin' Pelle Almqvist, lead singer of the Swedish garage-rock revivalists THE HIVES, joined FOO FIGHTERS on stage during the latter band's invite-only concert on Thursday, September 14 at Vasateatern in Stockholm to perform a cover of the AC/DC song "Let There Be Rock".

FOO FIGHTERS frontman Dave Grohl introduced Almqvist as the guy whom he dressed up as for Halloween back in 2002. "This is how much I fucking love this person and the band this person is in," Dave said. "This person happens to be from this city, so it's nice to be reunited with him. It's been a long time."

After Pelle made his way to the stage, Grohl continued: "So tonight I thought it would be a good idea if we did a song together, one that we've never played with him before, but I think it makes perfect sense for this show." He then broke into the opening notes of LED ZEPPELIN's "Stairway To Heaven", telling the audience, 'I've always wanted to sing this song," before stopping and adding, "Actually, that's not the right song. The real song sounds like this." He and the rest of FOO FIGHTERS then launched into the AC/DC classic, with Almqvist, who wore the shirt with the phrase "Boogie Till you Barf" for the occasion, providing lead vocals.

Almqvist later told GP.se about the FOO FIGHTERS collaboration: "Dave wanted me to sing ['Let There Be Rock']. I was happy. When I was six years old, my dream was to sing in AC/DC. If I closed my eyes, this was pretty close, I think."

FOO FIGHTERS' concert at Vasateatern was dubbed by Grohl the official release party for the band's new album, "Concrete And Gold", which went on sale at the venue right after FF finished its set with "Let There Be Rock".

THE HIVES, who are known for performing in ever-changing black and white suits and their spirited live shows, supported AC/DC on an Australian tour late in 2015.

After Brian Johnson's hearing loss was made public in March 2016, Almqvist — whose stage presence has been compared to that of Mick Jagger's — said that he would jump at the chance to perform with AC/DC.

He wrote in a post on THE HIVES' Facebook page: "Very sad to hear Brian Johnson can't do a bunch of AC/DC shows due to health problems. That man is a legend. I would like offer my sincerest well wishes and get wells. And if any help is needed, I put my foot forward and say: HERE I AM!"

He continued: "I have many many years of experience rocking the world's biggest stages and, according to others, I am the greatest frontman in rock, plus judging from the reaction in Australia, your crowd already seems to really like me. Plus, I have already been singing those songs since I was six years old. So, AC/DC‬, please consider my application!"