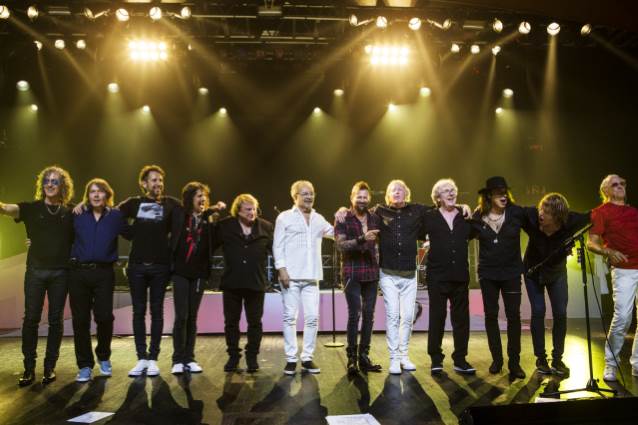 Legendary rockers FOREIGNER have announced "Double Vision: Then And Now", four special celebration events featuring all current bandmembers plus the original bandmembers who helped to put the iconic group on the map more than forty years ago. Lou Gramm, Dennis Elliott, Al Greenwood, Ian McDonald and Rick Wills join Mick Jones and FOREIGNER to rock through some of the best-selling songs from the band's albums and bring back the memories that make it feel like the first time for both long-time fans and new generations.

"Time has healed a lot, so onwards and upwards," Gramm recently told Rapid City Journal of the renewed friendship he has with his former bandmates.

"We just go out there and have a lot of fun," Jones told the Daily Herald. "The old members love it. Lou and our present singer, Kelly Hansen, get along like a house on fire… In the end, both Lou and Kelly really respect each other's vocal ability. You know, they push each other on. It's great to see it; I'm so happy. Because what Lou and I did together, it's a separate entity in a way, but to be able to look back and to see actually how much we did achieve together, I think it's been really great for that recognition."

The reunion shows come on the heels of the 40th anniversary of FOREIGNER's best-selling album, "Double Vision", and the band is working on a very special release to celebrate the momentous occasion.

FOREIGNER is also charting new territory on the album charts, as their latest LP, "Foreigner With The 21st Century Symphony Orchestra & Chorus", topped the Billboard Classical Albums chart for multiple weeks. This album has also inspired a new 60-minute concert special which aired on PBS TV stations across the country in June and July, "Foreigner Live At The Symphony".