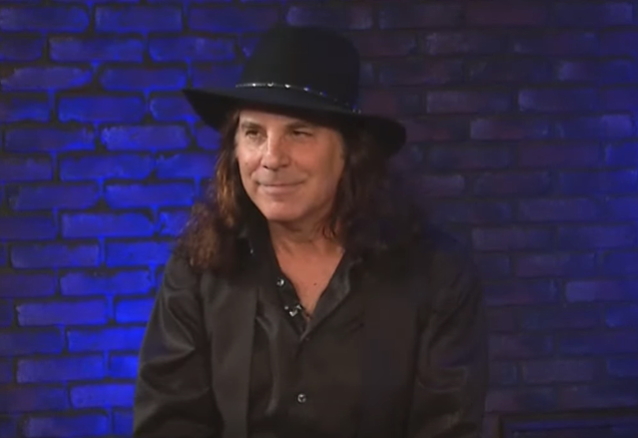 Earlier today, Gimbel released the following statement: "Today I'd like to share with everyone that after almost 30 years with FOREIGNER, I've decided it's time for me to finally stop touring, and try to settle myself down.

"I'm deeply, eternally grateful to Mick, Lou and Kelly, and the entire, incredible FOREIGNER family, years past and present.

"My sincerest thanks to everyone involved, especially our fans, for rocking with us throughout the years! I will miss you. But, I hope to see ya out there someday, somewhere. Perhaps at a fundraising golf tournament, or at a FOREIGNER concert, where hopefully I will occasionally be there to rock out with the band, which now includes our old friend, a phenomenal talent, Luis Carlos Maldonado. He has joined the FOREIGNER family, and it is sounding amazing!

"Live concerts have started again. Mick, Kelly & FOREIGNER are rocking heavily, as always. I hope you get a chance to check them out and enjoy FOREIGNER's awesome, timeless music.

Gimbel is known as FOREIGNER's jack-of-all-trades guitarist, saxophonist, flutist and keyboardist. He initially joined the group in 1992 but left to tour with AEROSMITH before returning to FOREIGNER in 1995.

Gimbel's plan to exit FOREIGNER was first revealed by his bandmate, FOREIGNER bassist Jeff Pilson, in a March 2021 interview with Rocking With Jam Man.

Speaking about the fact that FOREIGNER occasionally plays shows without any original member members — including founding guitarist Mick Jones — Pilson said: "It is really all about the music, and especially with FOREIGNER. FOREIGNER was never any kind of an image band at all, and that's actually worked to our advantage now in these later years where can tour — and we can tour without Mick — because the music is so strong that it is more about the music than it is about the personnel. And I think that's kind of cool."

FOREIGNER's last album, "Can't Slow Down", was the only full-length collection of new songs to have been released by the band since Kelly Hansen took over vocals after original singer Lou Gramm left the band for good in 2002. The album entered the Billboard Top 30, driven by the radio singles "In Pieces" and "When It Comes To Love". The band also has released a series of live albums and compilations, including 2016's "In Concert: Unplugged" and 2017's "40".

Pilson — one-fourth of the classic DOKKEN lineup — joined FOREIGNER in 2004.

Today I’d like to share with everyone that after almost 30 years with Foreigner, I’ve decided it’s time for me to...