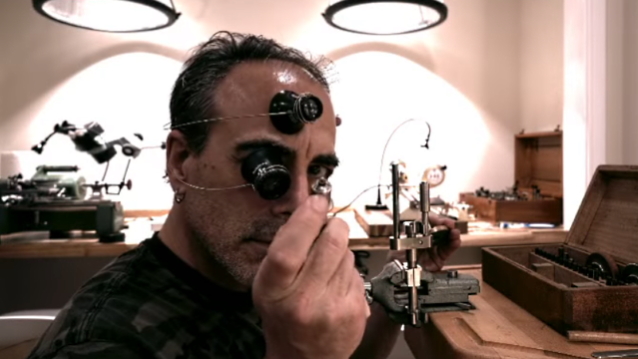 Former ANTHRAX guitarist Dan Spitz, who became a world-renowned, prize-winning watchmaker after leaving the band for the first time, has shared a short video detailing his watchmaking technique. Check it out below.

In a message accompanying the Instagram release of the video, Spitz wrote: "Utilizing a 100 year old screw grinding and polishing machine & technique~~~ I hand make each and every screw from raw stock for caliber j11.13. After turning to size on the Schaublin lathe and using a miniature roller die for threading, moving to a smaller lathe for exact sizing and angular areas, onto the F1 milling machine for screw slotting, into the dirty room for flame heat treating, and then annealing, to bring to proper elasticity and hardness properties, cleaned of burnt oil debris from cooling after heat treating, each screw enters this finishing technique ~~~ The machine has different weighted disks to grind the heads to parallelism and if done properly can obtain a black polish (as seen). ~~~~ Many weeks of work for each of my unique pieces goes into the many different size screws, all by hand. #iworkalone #mybossisthewatch".

In 1995, Spitz left ANTHRAX to pursue a career in luxury Swiss watchmaking, attending the Swiss watchmaking school WOSTEP on a full scholarship. He was certified a Mechanical Complications Specialist, earning Swiss degrees in micro-mechanical engineering, and opened his own luxury watch service. In 2012 Spitz was voted the number 1 interview of the year for the watchmaking magazine Hodinkee. In 2016, the production company Great Big Story produced a documentary on Spitz's work as a watchmaker.

Spitz, who currently resides in Gun Barrel City, Texas, about an hour's drive southeast of Dallas, recently told The New York Times that his carpal tunnel syndrome inhibits him from playing guitar for long periods of time. However, it hasn't stopped him from designing and building about three custom wristwatches a year, with prices starting at $128,000.

Five years ago, Spitz, a born-again Christian and Messianic Jew who frequently cites his faith as an influential component to his life, told the "Talking Bollocks" podcast about his decision to leave ANTHRAX for the second time after taking part in the reunion of the band's classic lineup in 2005 and 2006: "We were all in at that point in time. We did, like, two, three years [of touring], and we wanted to make new music [with the classic lineup]. And it was difficult. In the very end, we decided to stop touring, and it was difficult to get Joey to commit [to making a new album]. Me and Charlie [Benante, ANTHRAX drummer] were going back and forth talking to Joey, and I'd call Charlie afterwards and say, 'Did you get an answer? Did you get a 'yes'?' And he'd say, 'Did you get a 'yes'?' And I'm, like, 'I don't know what I got. I just got talked to for an hour.' We couldn't get Joey to commit for a very long time, and they couldn't stand still for very long. Obviously, it's a business; you can't just not do anything — you have to know: are we continuing, or are we not? So I was in to make another album as the real ANTHRAX. And we just [could not come to an agreement with] Joey. And you saw what happened thereafter. So I decided to just go back and chill. They continued on, and whatever they did, they did."

Last year, Spitz spoke to the Beyond Time YouTube channel about the passion and dedication that he puts into everything he does, whether it's playing music or making watches.

"Now you see what's called slamdancing everywhere," Dan said. "You see it at a Britney Spears concert. It's pretty sickening. If you know what that is, you know it comes from the punk era — it was dancing for the punk era. But eventually we brought that into heavy metal; it made its way in there. And you saw people at the beginning of the 'Big Four', which is METALLICA, MEGADETH, SLAYER and ANTHRAX, you saw the crowd try to get onstage. And it wasn't, 'It's the pop star. We wanna touch him. He's so cute.' It's the opposite. We're like these disgusting metal dudes. So why would you wanna be onstage? It's because we're all one big family. It's almost like THE GRATEFUL DEAD — it's the same kind of thing. They're not fans of what I do; they're in the band. Every single person is in the band. It's like they're there, [and] they're almost writing the songs, if you follow what I'm saying. It's that kind of human connection and love. And to give love is the most important thing. God gives us… and fills is with love. What we're supposed to do is transcend that love into the next person. And that's what I try to do with whatever I do. So even if it's a nontangible piece of metal that gets strapped to your wrist — we don't need to tell the time anymore on our wrist, do we? It really is a tangible piece of my love getting to you. So that better represents every fiber that God has made me to be."

A post shared by Daniel A. Spitz Watchmaking (@danspitzofficial)