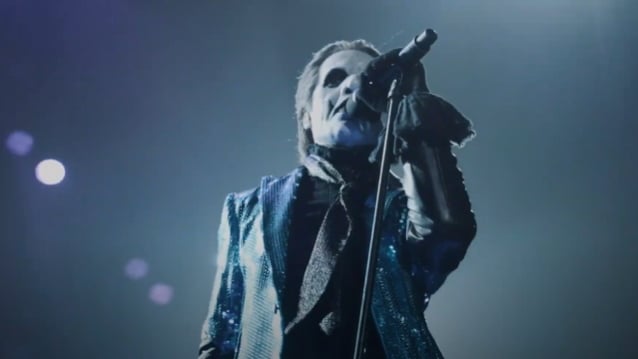 GHOST Shares Official 2022 'Live' Video For 'Mary On A Cross'

Swedish occult rockers GHOST have released the official "live" video for the song "Mary On A Cross". The performance footage for the Ryan Chang-directed clip was filmed on September 6 at the Yuengling Center in Tampa, Florida during the summer 2022 leg of the band's "Imperatour".

In a message accompanying the YouTube release of the new "Mary On A Cross" video, GHOST said: "We wish to inform you that all good things must come to an end. Although the US Imperatour will wrap this weekend we wanted to leave you with this token of our appreciation for your continued support. Watch 'Mary on a Cross – Live from Tampa 2022'."

Earlier this week, GHOST scored its first entry on the Billboard Hot 100 chart with "Mary On A Cross". The song, which was originally released as a two-track single in 2019 via Loma Vista/Concord (alongside "Kiss The Go-Goat"),debuted at No. 90 on the chart with six million U.S. streams and 1,000 downloads sold, according to Billboard.

"Mary On A Cross" has been gaining traction after a TikTok user used a slowed down version of the song to soundtrack a short video about the Netflix show "Stranger Things". Since then, the "Mary On The Cross" hashtag has amassed over one billion TikTok views and the song was used to soundtrack tens of thousands of videos on the platform. GHOST later released the official slowed down version of "Mary On A Cross" with added reverb.

Earlier this month, GHOST scored its first-ever Top 40 single in the U.K. with "Mary On A Cross".