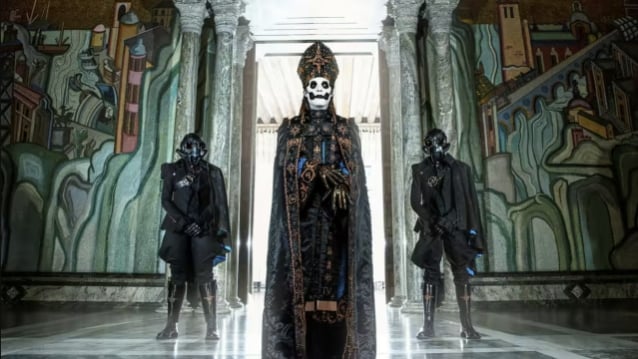 GHOST's 'Mary On A Cross' Single Certified Gold In U.S.

On November 30, GHOST's "Mary On A Cross" single was certified gold by the RIAA (Recording Industry Association Of America) for accumulating 500,000 certified units.

"Mary On A Cross" is the fourth GHOST single to achieve gold status this year. This past June, "Cirice" (from GHOST's third album, 2015's "Meliora"),"Dance Macabre" (from 2018's "Prequelle") and "Square Hammer" (from 2016's "Popestar" EP) were also certified gold. These marked GHOST's first RIAA certifications.

In September, GHOST scored its first entry on the Billboard Hot 100 chart with "Mary On A Cross". The song, which was originally released as a two-track single in 2019 via Loma Vista/Concord (alongside "Kiss The Go-Goat"),debuted at No. 90 on the chart with six million U.S. streams and 1,000 downloads sold, according to Billboard.

"Mary On A Cross" had been gaining traction after a TikTok user used a slowed down version of the song to soundtrack a short video about the Netflix show "Stranger Things". Since then, the "Mary On The Cross" hashtag has amassed over one billion TikTok views and the song was used to soundtrack tens of thousands of videos on the platform. GHOST later released the official slowed down version of "Mary On A Cross" with added reverb.

In September, GHOST scored its first-ever Top 40 single in the U.K. with "Mary On A Cross".