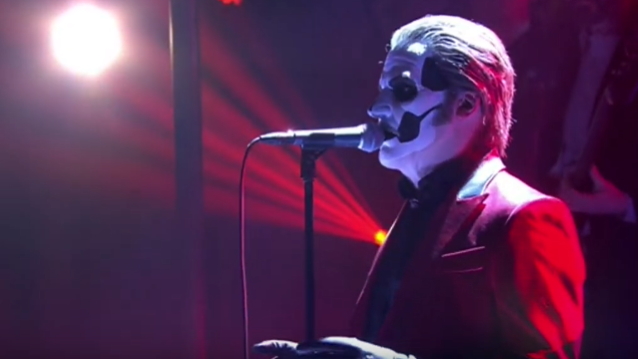 GHOST frontman Papa Emeritus IV (a.k.a. Tobias Forge) joined THE HELLACOPTERS earlier tonight (Friday, January 22) on Swedish national broadcaster SVT's "På Spåret" (On The Track) quiz show to perform a cover of THE ROLLING STONES' "Sympathy For The Devil". You can watch video of his appearance below.

Last month, GHOST shared an end-of-year Facebook update indicating that announcements about new music and live shows will be forthcoming in the next few months. The Swedish act has been working on "several big things" for 2021 and will be issuing sporadic updates throughout the year.

Last October, Forge told Sweden Rock Magazine that he was planning to enter the studio in January to begin recording GHOST's fifth album. "The actual recording will last around six weeks and then there's two to three weeks of mixing and mastering," he said. "So sometime in March the record should be finished, but it won't be released until after the summer. As it looks now, knock on wood, we will then go on tour. We won't release an album until we know that we are actually going on tour. The album release will coincide with the start of a tour. Of course, we could announce an album release date and then, for some reason, it might not be possible to tour, but that's a whole other matter."

In March 2019, at the final concert of GHOST's "Prequelle" album cycle in Mexico City, the band introduced the new character who will front the act for its next LP phase: Papa Emeritus IV.