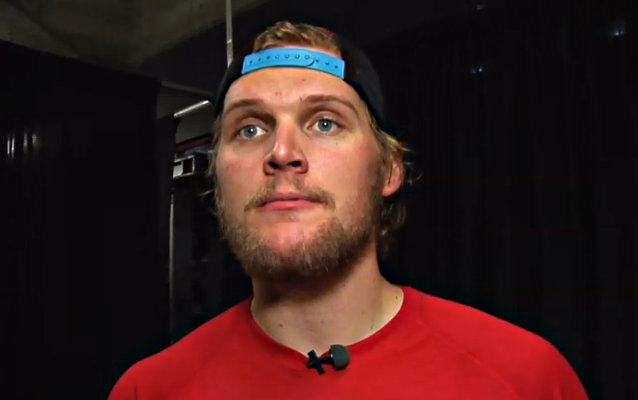 Ottawa Senators' goaltender Robin Lehner recently spoke to NHL.com about his new mask, a tribute to the Swedish metal band IN FLAMES, which hails from Robin's hometown of Gothenburg. The mask was designed by pro airbrush artist and custom mask painter David Gunnarsson of Daveart Designs.

Robin is very involved in the mask design process and makes sure his designer knows all of his ideas.

"It's a little bit the same pattern as I've been going with [on the previous mask], just different color," Robin said. "There's some hidden stuff here and there, and it turned out good. Maybe a little bit red, but I'll get some new pads to match it."

He added: "I have small things from my favorite band I listen to before games, a Swedish band called IN FLAMES. So I just have some of their cover art hidden a little bit here and there. I like to have their covers on there. I listen to them a lot before games and stuff. So yeah, they're great."

Lehner, who was selected by Ottawa in the second round (46th overall) in the 2009 draft, in July signed a three-year extension with the Senators worth $6.675 million.

Lehner, 23, set a new career high in playing 36 National Hockey League games last season while establishing a new personal best in victories with a record of 12-15-6. He also set a personal and franchise high with 53 saves in a 5-4 shootout setback to the New York Islanders on November 1, and then became the first goaltender in franchise history to face greater than 50 shots in one game and earn a victory in a 5-4 shootout win over the Blues on February 4 in St. Louis, which was ultimately the first shootout win of his NHL career.