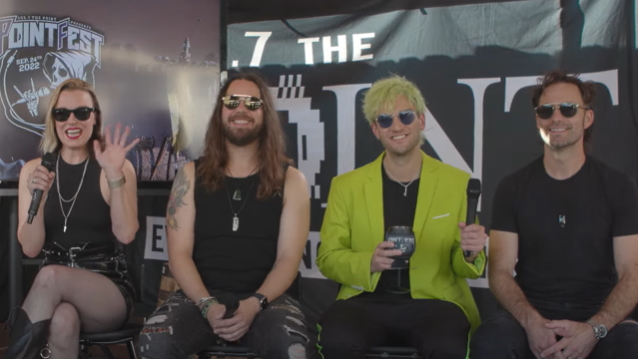 HALESTORM was interviewed by Liv Maddix of 105.7 The Point backstage at Pointfest on Saturday, September 24 at Hollywood Casino Amphitheatre in St, Louis, Missouri. Asked how different the band's latest album, "Back From The Dead", would have been had it not been for the global pandemic, HALESTORM frontwoman Lzzy Hale said: "It would be a totally, completely different record, or it wouldn't have happened [at all], especially in the way that it was. 'Back From The Dead' is really a true depiction of that journey that we were going through.

"The craziest moment was we were all listening to the final mixes, and we were, like, 'Guys, I think we made a heavy record,'" she recalled. "We weren't really intending on doing that, but we didn't have a stage to lay any of those emotions out on, we didn't have the camaraderie that we do with other bands, we weren't seeing live music, so we had to lay it out there somewhere. So it would have been completely different."

Lzzy (guitar, vocals) and her brother Arejay Hale (drums) formed the band in 1998 while in middle school. Guitarist Joe Hottinger joined the group in 2003, followed by bassist Josh Smith in 2004.

A month ago, Arejay spoke to Rock 100.5 The KATT about what it has been like touring during the coronavirus pandemic. He said: "Touring is different now. We're all trying to be very, very safe and just make sure that we don't have to postpone any dates. So we're still kind of doing a very 'bubble'-esque type of tour where we're not hanging out with people after the show. We have to put meet-and-greets on hold for a little bit, just to make sure that we can continue to do shows and we don't have to stop our tour for any reason. But it's honestly fine.