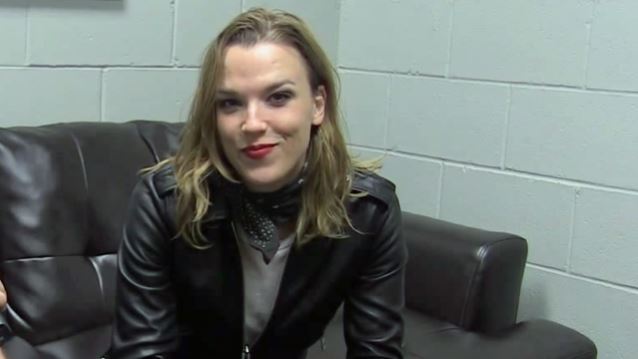 Asked if the title of HALESTORM's third album, "Into The Wild Life", is telling the truth about her own life, Lzzy said: "I think after… probably in the past two or three years, I've gone a little nuts. I'm trying to act my age this year. It's very difficult, actually, 'cause inside I'm perpetually 17. But then all of a sudden, you have these responsibilities. I'm 31 now. So that's a little bit of a relief."

Speaking about life on the road these days, Lzzy said:"For me, personally, I think… Really, I guess, it's kind of on me. Our schedule has gotten really nuts, and so I've kind of discovered in the last few months to a year that if I wake up hung over and can't find my pants, and I'm having a bad singing night or have to cancel a show, that's not just on me anymore, that's on… Well, it's on me, but it doesn't just affect me. That means that a lot of people don't get paid, and we have to re-route the system. So it's kind of… I don't know. I'm feeling the pressure, I think, as of lately."

Asked what the stupidest thing was that she has done, Lzzy said: "There was one time… And hence the pants inside joke we have right now. There's something about a bottle of tequila that… and this has only happened to me three times in my life… but every time that I share a bottle of tequila with somebody, I do end up misplacing my pants. Now, I don't get naked, like the song says, but I will somehow lose my pants and place them somewhere during the night, whether that be… once it was in the refrigerator… I woke up and my pants were in the refrigerator. The next time they were stuffed under a bunk mattress. And then the third time they were in somebody else's bag. I think it was my brother's backpack."

HALESTORM recently tied THE PRETTY RECKLESS's record for the most No. 1 songs on by an act with a female vocalist on Billboard's Mainstream Rock Songs chart.

HALESTORM's "Amen" jumped 4-1 on the August 1 Mainstream Rock Songs chart, tying the mark established by THE PRETTY RECKLESS when "Follow Me Down" became its third No. 1 on the chart dated May 2.

Previous HALESTORM chart-toppers were "Apocalyptic" (March 28) and the 2013 single "Freak Like Me".

HALESTORM and THE PRETTY RECKLESS are the only two female-fronted bands to lead Mainstream Rock Songs since Alannah Myles's "Black Velvet" topped the chart in 1990, according to Billboard.com.

"Into The Wild Life" was released on April 14. The CD follows up HALESTORM's Grammy-winning 2012 sophomore effort, "The Strange Case Of…"