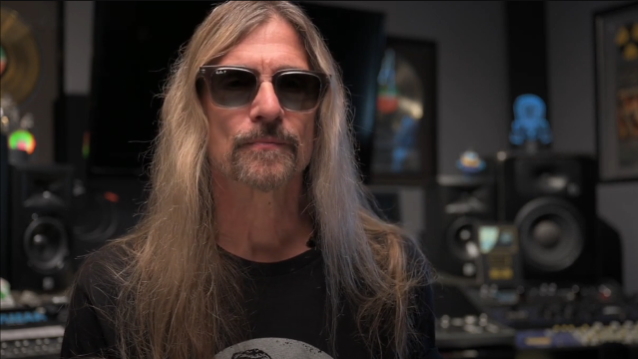 Bass player James LoMenzo spoke to Ashdown Engineering about how he ended up returning to MEGADETH as a permanent member of the band. LoMenzo was MEGADETH's bass player in the mid-2000s and stepped back in as a touring member for the 2021 leg of "The Metal Tour Of The Year". In May 2022, it was announced that Lomenzo was officially rejoining the MEGADETH family.

Reflecting on his departure from MEGADETH, LoMenzo said (as transcribed by BLABBERMOUTH.NET): "After three or four years in MEGADETH, David Ellefson returned. And I, like you, was pretty excited about that, because I had always been a fan of MEGADETH anyway. I'm one of those crazy guys that's, like, I want it to be the original band. I always want it to be the original band; it's kind of the way I grew up. But in lieu of that, I had to take the charge of the bass spot when he couldn't be there. So when he came back, I was fine with it. I've done two great albums — 'United Abominations' and 'Endgame'; we've done two world tours, been all over the place. And so at that point, I was kind of excited to maybe try something new. And so I went back home. I started a video production company. I started doing these local jams where all my famous friends would come by and jam with me. It was great. And eventually I ended up in [rock legend] John Fogerty's band."

On the topic of how he rejoined MEGADETH, James said: "How do I end up back in MEGADETH? It's like that 'Godfather' movie — 'Just when I thought I got out, they pull me back in again.' No… But anyway… When they needed a bass player — it became apparent — I thought to myself, 'They'll probably call me up.' But I also thought to myself, 'It's been a while since I played that kind of music, so maybe it'll be great. It'll be all right. Maybe not.' Sure enough, the phone rings, and Dave [Mustaine, MEGADETH leader] is, like, 'We've gotta do this 'Metal Tour Of The Year'. James, I know you're the guy who can do it. I would love to have you here. If you would just commit to just doing this tour, that would be great.' And I thought, 'Well, that's kind of weird. He doesn't want me to rejoin the band.' But then I thought about it. He knew I had another band, and he was telling me, 'I don't want you to screw up whatever you've got going.' I was being loyal to John. So we went out on the tour, and gosh, it was just the best time. I was so enamored with the band that he put together and with Kiko [Loureiro, guitar] and with Dirk [Verbeuren, drums] that I was blown away. And Dave, gosh, he's just delivering the goods every day. The great thing about Dave is he's been through a lot. He recovered from cancer. He's had problems with his back. Over the years, he's had more things than most professional wrestlers would have, and he shows no sign of it — he just gets up there and plays and just gives it his all. So after that tour, I was sitting there going, 'Man, I think I might like to stay here for a while.' And so, luckily, as luck would have it, not too long after that, Dave calls me up at home and he goes, 'You know, we would love to have you be part of the band officially if you wanna stay.' And I thought, 'That's exactly what I was thinking, man. Let's do it.'

"So, anyway, [I am now] back in MEGADETH," James added. "Back out on the road. The newest album is 'The Sick, The Dying... And The Dead!' We have been touring that one. We just started this year, and we show no signs of stopping. We're coming to you, kids."

In addition to MEGADETH and Fogerty, LoMenzo has played with Ozzy Osbourne, Zakk Wylde and WHITE LION.