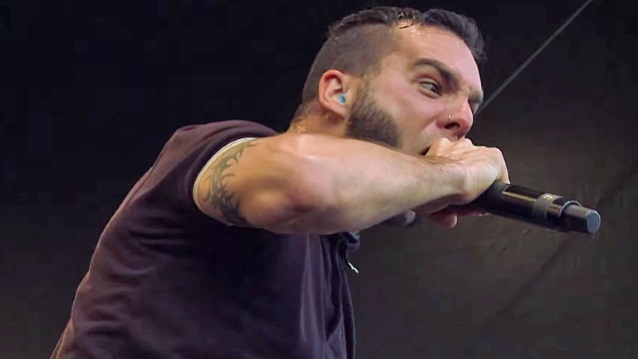 JESSE LEACH: A Lot Of People Assume I Became Rich After I Rejoined KILLSWITCH ENGAGE

KILLSWITCH ENGAGE singer Jesse Leach was interviewed for a recent episode of HATEBREED frontman Jamey Jasta's official podcast, "The Jasta Show". You can now listen to the chat using the SoundCloud widget below.

Speaking about KILLSWITCH ENGAGE's task of following up the band's 2009 self-titled album — which marked singer Howard Jones' final recorded appearance with the group — Leach said: "I'll be honest with you. I think some of [the other guys in KILLSWITCH] had the attitude that they were phoning it in as well on that [self-titled] record, especially. I think the band, where it was at that point, they were all sort of over it, and I think it really kind of shows on that record. And that was the big crisis with them."

He continued: "I'll state this for the record too: I think Howard has an incredible voice — powerful — and sometimes trying to sing some of his stuff is pretty intimidating. It took me a while to realize that I can't sound like him; I just have to be me. And that was kind of messing with my head a little bit at first.

"The important thing, I think, for [2013's 'Disarm The Descent' album], too, was being able to tour while we were working on it. If I had just written a record without touring, I don't think it would be what it was — lyrically, the feel of it… Getting back around those guys, hearing all the stories from the road, hearing all the stories about where they were in their heads when they wrote the last record… Some of my lyrics have to do with that — where they were when they wrote that last record, and losing that fire and that spirit. It's something I don't ever want to happen to me. So I think it was a narrative going on through the lyrics of 'Disarm The Descent', and the title itself suggests that as well. Which I didn't come up with the title — Mike D. [bassist Mike D'Antonio] did. He had an idea for artwork and the title. I thought it was briliiant, and so that became the theme, the running theme, throughout the whole record."

Leach also talked about the state of the music industry and how increasingly difficult it is for bands to make a living by playing music, even for groups like KILLSWITCH ENGAGE, who are able to play for thousands of people every night.

"I love vinyl, I love that it's coming back," Leach said. "I'm all about vinyl — period. Hands down, across the board. I hope that becomes more of a popular medium. I love the idea there's a download code when you buy the vinyl. I think all that is absolutely amazing. I think that's the way to go, personally, for me. I have vinyl at home, then I have the MP3 that I downloaded from the band, from their vinyl, and have that in my car. That's the ideal world. I don't think that'll happen."

He continued: "What people don't realize, 'cause a lot of people assume I [rejoined] KILLSWITCH and I'm rich, which is a joke; I mean, look at my neighborhood. You know what I mean?! But the one saving grace that we have on tours where we break even is we'll wait for the merch numbers to come in. Those kids who spend that 20, 30 bucks on a t-shirt and a CD or whatever — wristbands, belt buckles, whatever we have to offer — that stuff makes a huge difference at the end of a tour. When those numbers come in, it's like breathing a sigh of relief, because when you're out on a tour…"

Leach added: "I mean, people know this hopefully, but for those that don't, the amount of money a band spends to go on tour, sometimes you come home and you don't make money, because you spent enough money on stage stuff, on tour buses, or whatever. So t-shirts are huge, and buying a record is huge. So all that. It's a trickle-down effect. That's what's gonna help a band have longevity, and sort of decide whether they're gonna tour or not gonna tour based on the numbers."