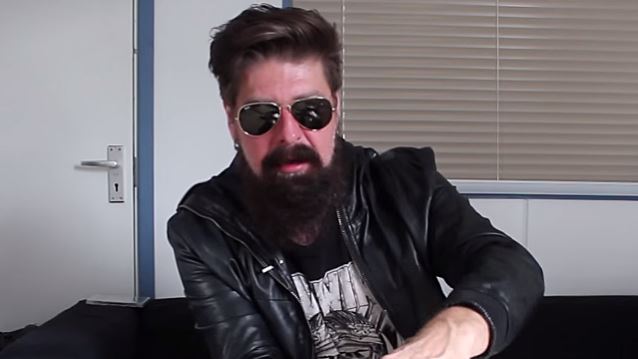 JIM ROOT Says He Was Fired From STONE SOUR By Phone

Guitarist Jim Root says that he is still unsure as to why he was fired from STONE SOUR, claiming that he "hasn't talked to certain guys" in the band to get more insight about his departure from the group.

Root was dismissed from STONE SOUR at the end of last year — even as he and Taylor were working together on a new SLIPKNOT album. Root told Australia's Music Feeds: "I still haven't talked to certain guys in that band [STONE SOUR], so I really don't know what they were thinking or a hundred percent of the reason why they made the decision that they made. I mean, it was basically put to me over a phone call and I thought that was pretty lame. Whatever, it is what it is. Onward and upward. I think I have a little bit of a different opinion on how music should be done anyway. Maybe it is for the better."

Jim recently told Revolver magazine that "it became apparent to me near the end of the album cycle for 'House Of Gold & Bones' that it had basically run its course. But the band kept pushing for more dates, and I was just, like, 'It's time to stop!'"

He continued, "SLIPKNOT made it possible for STONE SOUR to have everything that it has and there were people in SLIPKNOT that have been sitting idly waiting to do a new album. And I had fans asking me every day, 'When are you doing SLIPKNOT?'"

Root told The Pulse Of Radio when he first revealed that he was sitting out the last STONE SOUR tour — before it was announced that he was let go — that he was already dealing with a lot of stress juggling the two bands. "You know, unfortunately I'm only one person," he said. "I can't really be in two places at one time and the amount of focus that I need to put into SLIPKNOT makes it really difficult for me to be on tour with STONE SOUR. It's crushing and it's heartbreaking and I really don't like the idea of not being out there, but I don't really see any other way to really do it."

Taylor addressed the issue as well, saying, "It was difficult, at first. It put a strain between he and I for a little bit. It was one of those things where the timing just sucked. But at the same time, we knew that, on both sides, we’ve gotta do what we’ve gotta do."

Taylor added that working together on the new SLIPKNOT album actually helped mend fences between him and Root, explaining, "We were able to kind of channel that and put it into what we were making, which I think in a lot of ways helped the overall aggression and emotion really get there."