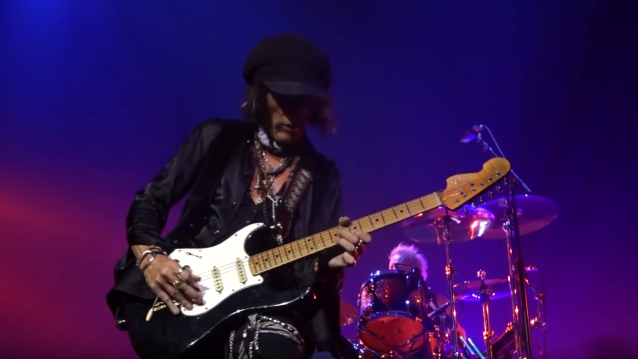 JOE PERRY On AEROSMITH's Las Vegas Residency: 'We Wanted To Keep The Thing Real Rock And Roll, But Put On A Big Show'

AEROSMITH was out on the road all month before hitting Las Vegas again as part of its ongoing "Deuces Are Wild" residency at Park Theater at Park MGM. Guitarist Joe Perry took time out to chat with "The Eddie Trunk Podcast" about the shows, explaining: "We really didn't know what to expect when we came in here [to Vegas]. We were talking to different people who have done it. I know that rock bands have come in and done two or three weeks, a month maybe, and what we saw was most bands would just kind of strip down their regular live show, bring in a little bit more production. And then we also saw… We looked at a lot of different shows — everything from 'Love' to David Copperfield to every other choice of acts on the [Las Vegas] Strip. And we decided that if we were gonna do this, we were gonna make it be not just if you wanna see AEROSMITH, but if you wanna see a rock and roll band and have that kind of music. It's like if you wanna go to see the 'Love' show and see THE BEATLES stuff taken apart and put together in a really amazing way, you go to that. If you wanna see magic, you go to see David Copperfield. If you wanna go to a Cirque Du Soleil show, there's a number of 'em you can go to see. So we wanted it to be a little more than just for AEROSMITH fans. We wanted to have it so that even if you just had heard of us, maybe you'd come and you'd be entertained"

AEROSMITH is scheduled to play 17 more shows in Las Vegas before the end of the year — four in September, four in October, seven in November, and two in December.