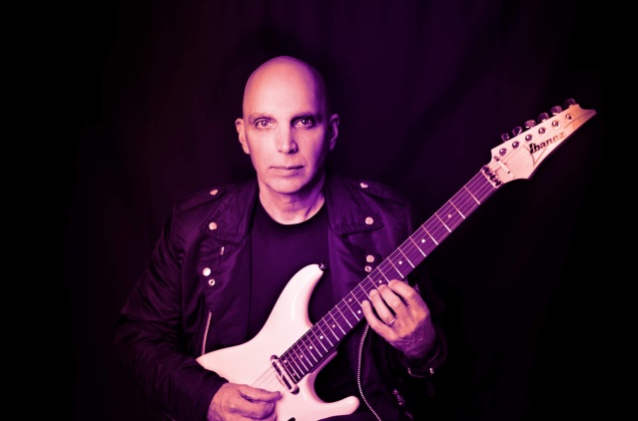 Fresh off the heels of his first foray as a touring visual artist earlier this year with stops at galleries in Florida and New Jersey, world-renowned guitarist Joe Satriani is now planning to bring his showings to the Washington, D.C. area. Satriani's next art appearances will be at the Wentworth Gallery at Tysons Galleria in McLean, Virginia on Saturday, June 11 from 3 p.m. to 6 p.m. as well as a visit on Sunday, June 12 at the Wentworth Gallery at Montgomery Mall in Bethesda, Maryland from 1 p.m. to 3 p.m. Satriani has prepared one-of-a-kind pieces for the exhibit, including original canvases and hand-painted guitars. Satriani has just also released his 19th studio album, "The Elephants of Mars", to much critical acclaim.

Christian O'Mahony, principal at Wentworth Gallery, said: "Joe is a master storyteller. Just as his music draws in the listener, his art draws in the viewer. His artwork is emotional, imaginative, and fantastic. Not only do you see the universe through Joe's eyes, but you also contemplate our place in it."

Added Joe: "Music and art are my passions. I like making the invisible visible and the unimaginable real. The image on a canvas or an electric guitar for that matter can make you feel something unexpected and revealing, something that is the beginning of a greater personal insight. Challenging the straight line and the concepts of what belongs with what excites me. I want to experience new color combinations to make me see beyond the prevailing reality. There's a balance between seriousness and humor that can imbue in a painting a kind of resilience and longevity, making it forever contemporary. When I paint and play my guitar, I strive to be in a state of exhilaration and communicate that feeling to my fans."

Masks are required in all Wentworth Galleries

All artwork on exhibition is available for acquisition.

Satriani is the world's most commercially successful solo guitar performer, with six gold and platinum discs to his credit (including one more gold award for the debut album by his band CHICKENFOOT),and sales in excess of 10 million copies.

Since September 18, 1970 (the day his idol Jimi Hendrix passed away),Satriani has dedicated himself to the artistry of the instrument. While still a teenager in his hometown of Westbury, New York, he taught guitar to another budding six-string hopeful, Steve Vai. A few years later, Satriani moved to San Francisco and played guitar in a popular new wave band, THE SQUARES, and briefly joined THE GREG KIHN BAND before the release of "Not Of This Earth".

Satriani's reputation was already growing in guitar circles — along with Vai, some of his other students were METALLICA's Kirk Hammett and TESTAMENT's Alex Skolnick — but in 1987, he broke through to the masses with his second studio full-length, "Surfing With The Alien", a massive seller (it hit No. 29 on the Billboard 200) that included the radio hits "Satch Boogie" and the title track. The success of that album caught the attention of Mick Jagger, who asked Satriani to be his lead guitarist on his first-ever solo tour in 1988.

As a live performer, Satriani has toured the world with each new release. In 1993, he joined DEEP PURPLE as a temporary replacement for Ritchie Blackmore during a Japanese tour. In 1996, Satriani founded the multi-guitarist traveling experience called G3, which has seen him share stages with Vai, Eric Johnson, Yngwie Malmsteen, Robert Fripp, among others. And starting in 2009, Satriani traversed the globe again as a member of CHICKENFOOT. The all-star band (which also includes singer Sammy Hagar, former VAN HALEN bassist Michael Anthony and RED HOT CHILI PEPPERS drummer Chad Smith) has issued two albums, their debut and 2011's follow-up, "Chickenfoot III".

Satriani's solo discography includes a host of classics, including 1989's "Flying In A Blue Dream", "The Extremist" from 1992, "Is There Love In Space?" (2004) and 2010's "Black Swans And Wormhole Wizards". His 15 Grammy nominations have been for songs such as "Always With Me, Always With You", "The Crush Of Love" and "Summer Song", as well as full albums like "Surfing With The Alien", "The Extremist" and "Super Colossal".

Satriani has appeared in motion pictures such as Christopher Guest's 2006 release "For Your Consideration", and the 2011 Brad Pitt starrer "Moneyball". Through the years, he has designed and endorsed guitars, amplifiers and effects pedals for Ibanez, Marshall and Vox. His JS Series of guitars through Ibanez has been one of the company's most popular and consistent sellers.

As an artist, Satriani released his first collection, "Radiant Collection", in the summer of 2019 with "Radiant Echoes Collection" following closely in 2020, both receiving both critical and fan praise. The first two collections were created in part from Joe's performance on the fretboard. He utilized a glove developed by SceneFour that uses light to chronicle his movement on the fretboard and translate it into abstract artwork before taking the canvases back to his home studio and adding paint. These original canvases caught the eye of Wentworth Galleries and Satriani began to develop one-of-a-kind works for a showing in Florida. In addition to the many "space"-themed pieces he will be presenting, Satriani will also be showcasing his highly sought-after hand-painted guitars that he has been modifying for years. This is Satriani's first foray into the world of a touring artist.

Saturday started out at the Wentworth Gallery at the Town Center at Boca Raton. to view Joe Satriani's artwork,

A couple of shots from last month's visit to see Mr. Joe Satriani and grab one of his works, thanks so much to the Wentworth Gallery Short Hills!!!

Joe Satriani Fine Art Tour! Yesterday, we had the honor of meeting Satch in person and talking about his absolutely...