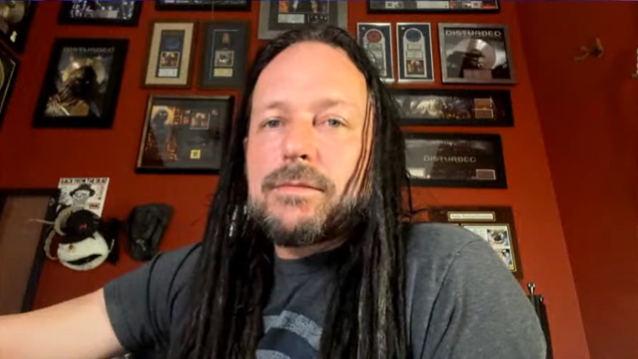 In a new interview with "All Access Live With Kevin Rankin", DISTURBED bassist John Moyer spoke about the band's plans for the coming months. He said (as transcribed by BLABBERMOUTH.NET): "DISTURBED has a handful of shows coming up. We've got 10 or 11 shows coming up this year, mostly festival dates. And then 2023, we will be out with a new record and a real tour where we're gonna be doing our show again. We're gonna be coming to your town and we're gonna be putting on the songs that our fans love to hear, bringing out some great opening acts, going to Europe, going overseas, hopefully going to South America again. So we're gonna try to do it again come 2023. We're excited."

Earlier this month, DISTURBED drummer Mike Wengren told "The Mistress Carrie Podcast" that he and his bandmates are "definitely in the middle of the process" of making a new album. "We have been writing, we have been recording," he said. "I'm very excited about everything that we're coming up with right now. It's feeling great, it's sounding great."

Wengren's comments came just days after DISTURBED singer David Draiman confirmed that the band has completed recording the new LP. Prior to that, Draiman shared a since-deleted Instagram photo of a whiteboard — which appeared to have been taken in a recording studio — charting DISTURBED's progress with recording. On the board, 10 songs were listed, featuring such titles as "Hey You", "Love To Hate" and "Part Of Me". David captioned the picture: "And that's a wrap people. #HolyShitIsThisGood #epic @disturbed". Also included on the whiteboard was the guitar tuning for each track, with most of them using "Standard C#", "Drop C#" or "Drop C" tuning. One track was also recorded in "Drop A#" tuning, while another is in "Drop B".