EX DEO, the new band of KATAKLYSM frontman Maurizio Iacono, will premiere a new, demo version of the track "Cry Havoc" on January 11 via MySpace. The song will appear on the group's forthcoming debut album, "Romulus", tentatively due in September 2009 via Nuclear Blast Records. The CD will be produced by KATAKLYSM guitarist Jean-Francois Dagenais (MISERY INDEX, DESPISED ICON, MALEVOLENT CREATION) at JFD studios.

Commented Iacono: "In 2009, a band I've been waiting to launch for the longest time will finally see its light of day: EX DEO. I've dabbled with this idea even at earlier times when KATAKLYSM's 2001 album 'Epic (The Poetry of War)' and 2002's 'Shadows & Dust' were released. I was never able to fully carry it out the right way, that is, until now. As Roman ancestors believed, once Jupiter (king of the gods, son of Saturn) made his rulings, it had to be followed. The time has now come, it is now your turn to follow the calling and witness the rise of this new blood: EX DEO.

"I chose to debut the new track on January 11 because it is the day my father was born (he passed away a few years ago). My father was a disciple of Roman history and taught me many things throughout the years. I remember a time he said, 'Son, everything you see around you, our ancestors built the foundation for it. From the way the wars were fought to the democracy you live in…' and I have been fascinated by it ever since. For his soul looking over me and for the future of this project, I launch a new seed for Roma on the 11th of 2009. I promise something that is much needed in the scene today. It's going to kick ass!"

Maurizio will be checking in regularly with studio blogs and the writing/recording progress starting February 1.

"Romulus" is scheduled to be completed by mid-March. 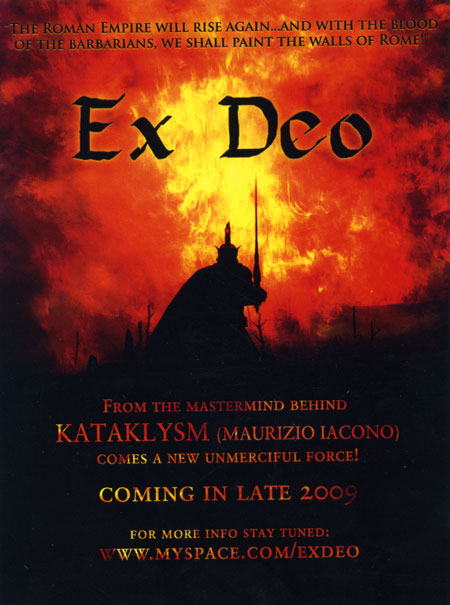