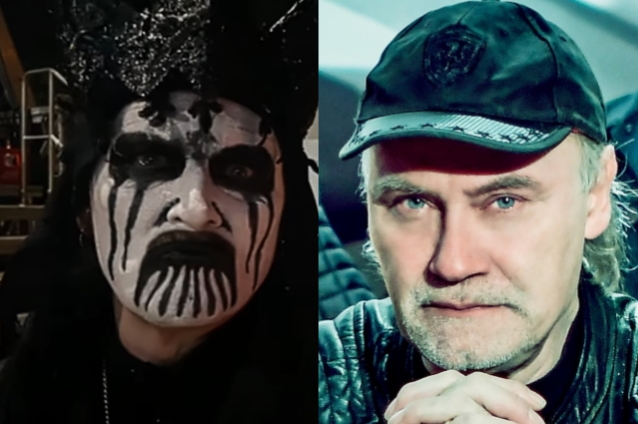 When it was announced in 2019 that the influential Danish heavy metal act would reunite for an unspecified number of concerts throughout Europe during the summer of 2020, it was revealed that MERCYFUL FATE's lineup for the shows would consist of King on vocals, Hank Shermann on guitar, Bjarne T. Holm on drums, Mike Wead on guitar and Joey Vera (ARMORED SAINT, FATES WARNING) on bass.

Asked in a new interview with Creem magazine why Denner isn't involved in the MERCYFUL FATE reunion, King said: "There are reasons Michael Denner and [drummer] Kim Ruzz are simply not here. I know that Michael Denner did an interview recently, and I'm not going to get into it, but he said a lot of things that are absolutely not true. I could go into a lot of details about the reasons that this is not a lineup with him in it, or Kim Ruzz in it. I don't want to say anything bad about anybody, but you can't say, 'Hey, I should have played there.' Why? Should I throw out a band member that is absolutely perfect for the band, that goes all out for the band all the time, no matter what? And his skill is beyond anything I played with on that spot in the band? There's no way that he's going to get fired because someone else is suddenly interested in the band. That's completely wrong. There's no way I would ever treat anyone like that."

King went on to say that it has been "very cool and a lot of fun" to play with MERCYFUL FATE again, but he clarified: "People have misunderstood what we are doing now. This is not a reunion. We are just picking it up again because the stars are aligned correctly now. And that's been the thing all the time. Before when people asked, 'Do you think you're going to play with MERCY again?' I would never say never. But it's got to be completely right. I don't want to go out there and try to milk a cow and do a show with the backdrop and then collect and say, 'That was that.' That's not right. And Hank has the same philosophy. Either we do it 200 precent, or we don't do it."

Last month, Denner said that it was "heartbreaking" for him to be excluded from MERCYFUL FATE's current reunion. Denner, who was a member of MERCYFUL FATE's classic lineup, addressed his absence from the band's reunion in an interview with Finland's Chaoszine. The guitarist said: "I [feel like] this is not my band anymore. I'm not part of it, because they didn't tell me; they didn't invite me. We didn't even have a discussion about it. So, of course, it took some time for me to digest it. It was quite painful, because I miss my friends from the '80s — I miss them. But not the people who [are] in the band today. I wish them the best. I mean, the better they play, the more records we can sell and the more money I will get in the end. Of course it's heartbreaking. And also to see and hear — they play my signature stuff. Most of the songs they play now is things I've done — I mean, my signature solos, my themes, my arrangements, my stuff. And it's another guy who plays. But then again, Mike Wead is a great guitarist, and he's still a good friend of mine. So if anyone should do the job, I'm glad it's him who did it, really. He can do the shit. That's some sort of comfort in all this agony and disappointment — that it's Mike Wead who plays. And that makes me feel good."

Regarding his relationship with King, Michael said: "The thing is me and King, we had a discussion some years ago. It was about a cover of a DENNER/SHERMANN album. Because the artist who did the artwork for the cover is [Swedish artist] Thomas Holm who did [MERCYFUL FATE's] 'Melissa' and 'Don't Break The Oath'. And, of course, his way of painting and stuff, it was a bit more than a bit similar to 'Melissa' and 'Don't Break The Oath', and King got upset and tried to stop the album. He did manage to stop — as I recall it — the merchandise side; t-shirt design and so on. I'm not a hundred percent sure [about] that, but that could be the story.

"Me and King are quite alike," he explained. "We don't turn the other cheek. I mean, two old assholes who don't wanna stretch the hand out and say, 'Okay, let bygones be bygones. Let's try to do this.' So we keep the disagreements and the enemy side of it. That's just sad. But with Hank, it was a different story because it came out of nowhere. We had a good teamwork going with DENNER/SHERMANN. And one of the last things Hank told me was, 'If we do a MERCYFUL FATE reunion, it should be with you and me. No question about it.' But of course, King, he has some strong will and some power behind it — Metal Blade Records and money; big salaries. So Hank chose to go that way and just leave me out in the cold. And [Hank and I] haven't spoken since, more or less. And that's a few years now. But then again, we've been a guitar team since the late '70s — that's a long, long time — and the friendship. And it's like telepathy. You know exactly which guy should play what parts and we know each other like it's in the pocket. But he chose to go that way, and I couldn't live with that. So we don't talk anymore. But I wish him the best — I wish him just the best of luck in the future. But his future will be without me."

Asked if he thinks there is still a chance that he will one day reconnect with Hank, Michael said: "Not in a million years. That will never happen — never. It's just the end of it, because I could never trust this guy again. He broke my heart and he stabbed me in the back. But still, I miss my old friend; I miss my guitar partner. But I will never take a chance again, trusting this guy, when he could do the thing he did. I will never be safe. So I feel sorry for me and I feel sorry for him. It's a loss. That's the way life goes. You have to carry on."

In 1998, METALLICA paid tribute to MERCYFUL FATE by recording a medley of classic MERCYFUL FATE songs on the album "Garage Inc." Titled "Mercyful Fate", the medley included parts from "Satan's Fall", "Curse Of The Pharaohs", "A Corpse Without Soul", "Into The Coven" and "Evil".

Lars Ulrich of METALLICA (a fellow Dane) played drums on a new version of MERCYFUL FATE's "Return Of The Vampire" on the "In The Shadows" album, which came out in 1993.