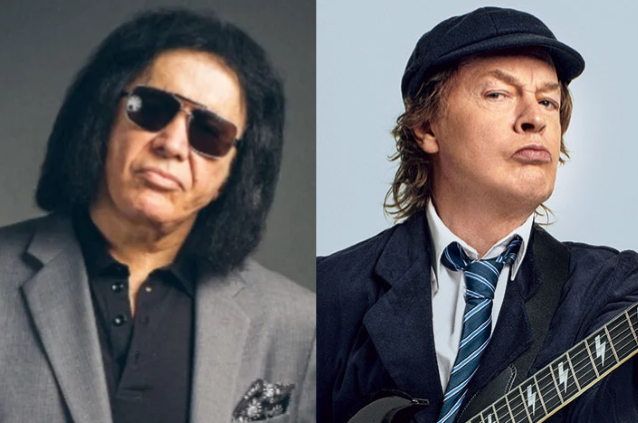 While speaking to Australia's Triple M radio station, Gene Simmons reflected on how AC/DC ended up supporting KISS on a short run of dates in late 1977 and early 1978. He said (as transcribed by BLABBERMOUTH.NET): "I saw them playing this really small club in L.A. I happened to be there. And all I remember is being close to the stage, 'cause I love that — I wanna feel it; I wanna feel the chest kind of cave in when the bass and the kick drum hits it. I don't wanna be at a safe distance. If it's too loud, you're too old. So I'm in the front. And even after the blackouts between songs, there's Angus [Young] just running around on stage, not posing — just kind of feeling it, like somebody in a trance or something. I said, 'That guy is rock and roll. That guy is real.' So after the show, I went backstage. And [Angus came up to me and said], 'Oh, Gene Simmons.' I'm doing a bad Ozzie accent. 'Oh, Gene Simmons. Yeah. All right.' [And I said], 'You're the guy. What's your name?' 'Angus.' And then he smiled. And I'll never forget it, he didn't have front teeth. I guess at that point they couldn't afford it. So I said, 'Let me take you a few blocks away. I wanna sit down and talk with you.' So he did."

He continued: "I'll never forget it, we went to a place called Mel's Diner, which is in some parts of the world real famous. And there we are at 1 a.m. in the morning. To some people, I'm kind of a big deal, so all the waitresses and everybody gathered around the table. And at that point, they had yet to know who Angus and the boys were, but it was just Angus and myself. 'What would you like, Mr. Simmons?' All that kind of stuff. I said, 'Ask my friend first.' I'll never forget it, Angus asked for a frankfurter — instead of a hot dog — and beets. And they looked at each other, and I said, 'Get the man what he wants.' So they did. They brought it back. And I'll never forget, Angus picked up the hot dog without the bun and started biting into it on the sides of his mouth because the two front teeth were missing. And I said to him — I can still remember most of the conversation — 'You guys are great. I'm gonna make some calls. You're going out on tour with us."

Two years ago, Simmons told SiriusXM that AC/DC was the best opening band KISS ever had. "A band that shares the same philosophy — no matter what any other band is doing, to thine own self be true," he said. "I've said it before but it's more true now than ever.

"A lot of people look the same and act the same and do the same thing. Every once in a while, you see a band like AC/DC. Nobody's like them. We'd like to think we're unique in that way too."