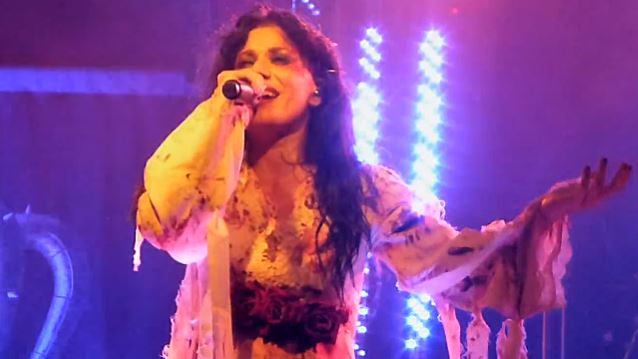 LACUNA COIL's CRISTINA SCABBIA: 'I Don't Think There Is A Recipe For Success'

Vocalist Cristina Scabbia of Italian heavy rockers LACUNA COIL was interviewed by "Real Nonstop Talent" prior to the band's February 7 concert in Guaynabo, Puerto Rico. You can now watch the chat below.

Speaking about LACUNA COIL's "secret" to success, Scabbia said: "I have no idea. A lot of people ask us, 'What's the secret?' But I don't think there is a secret, I don't think there is a recipe for success. You just do whatever you want to do with passion and more people will relate to you because they will see the honesty that you're putting in what you're doing. So I really don't know. I always think about it every day, and I feel very blessed. We're coming from Italy; that is not exactly a rock/metal country. We're not English [and] we're not Americans, but somebody believed in us, somebody made [it possible for] us do whatever we want to do, and now we're doing this for a living and we've been doing it for years. And I think it's something magical, something we are really, really blessed with. So I'm just thankful about it. But I cannot tell you what's the secret of it. I have no idea. I wish I knew."

Asked if she can foresee LACUNA COIL ever going back to its early sound on one of the band's future albums, Cristina said: "It would be hard to reproduce the same atmosphere, because we're talking about, like, 17 years ago, 15 years ago, 20 years ago, almost. And you're not the same person just because you grew up as a person… It would be like to wear the same style of clothes [as] you were wearing 20 years ago or having the same taste. I mean, that would never happen; every person evolves and kind of changes a little bit. So it might happen, or it might not happen. It depends what happens."

She continued: "We always like to keep a balance between melodies… similarities [to our previous music], but also new influences. Putting something more aggressive, something more melodic, sad, melancholic… We just like to mix up things."

Scabbia added: 'With the [next] record, I don't know. The music I've heard so far is pretty heavy, but, of course, we want to try to put vocals on it and see how it sounds. Because we want something that kind of sounds like LACUNA COIL, but with a new touch to it, something that gives a little bit more compared to the other albums."

LACUNA COIL's latest album, "Broken Crown Halo", sold around 13,000 copies in the United States in its first week of release to debut at position No. 27 on The Billboard 200 chart. The CD arrived in stores on April 1, 2014 via Century Media.