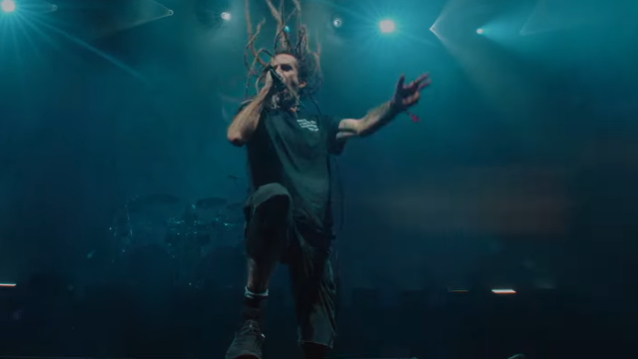 Following their headlining set at the Bloodstock Open Air festival in August, Richmond, Virginia metallers LAMB OF GOD have now shared a live video for "Omens", the title track of their upcoming album. With their set both crushing and scorching in equal measure, the video footage was captured during that performance and premieres for the first time today.

When the "Omens" single was first released, LAMB OF GOD frontman Randy Blythe commented: "I think a lot of the messes human beings find ourselves in could be very easily prevented simply by paying attention to obvious repeating patterns, both in our personal lives and in a broader sociohistorical context. What some call 'omens' are really just manifestations of the fact that there is nothing new under the sun. It's foolish to ignore this, but we all do it."

Last month, LAMB OF GOD bassist John Campbell told Germany's EMP that "Omens" is "a fairly dynamic record. There's a few other little surprises and tweaks and things to come in October," he said. "But we recorded it differently this time. We went to Los Angeles and all of us in the same room and same time recording, which gave us some leeway to make changes as things happened and just kind of feel it out in a different way than we've done in the past, which would be everybody kind of going in their corner recording and it gets assembled later. So it was a real team effort on this one, in the recording — all the way through it's been a team effort — and in the recording especially, when we were all in the same room doing that stuff, it was great. I got to spend three and a half weeks working on a record instead of four or five days — working on the recording of the record."