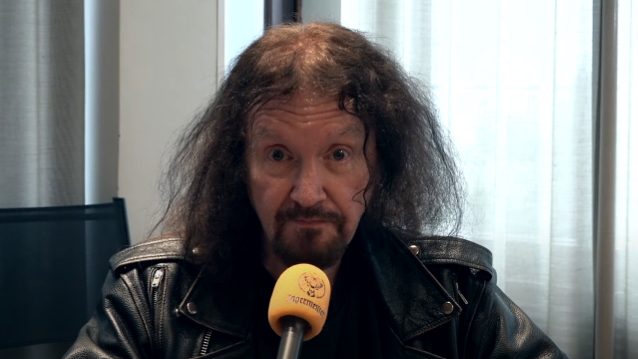 Ex-JUDAS PRIEST drummer Les Binks, who was inducted into the Rock And Roll Hall Of Fame earlier in the month along with some of the other former and current members of the band, reflected on the experience in a new interview with Finland's Chaoszine. He said (as transcribed by BLABBERMOUTH.NET): "Well, it was a long time since I'd met the guys in the band, since I left the band. And obviously K.K. [Downing, former PRIEST guitarist] left in 2011 as well, so it was his first time playing with them again. And you may be aware that the atmosphere between the two hasn't been great over the last few years. So a lot of people were surprised to see that actually happen. Not many people thought they'd ever see K.K. back with JUDAS PRIEST, let alone me, especially two drummers. But Richie Faulkner [current PRIEST guitarist], he's an old friend of mine anyway because we both worked together long before he joined JUDAS PRIEST. So it was good to catch up with Richie again. And he and K.K. got on really well, especially on stage together. I got on great with everybody in the band; I never had a problem with anyone in the band when I was working with them. My reason for leaving the band was purely down to the management they had then. Unfortunately, the management weren't very nice people, and they were ripping me off and ripping the band off. It's a long story, but if you get to a situation where you can't feel comfortable and confident in the people you're working with, especially on that level, there's no other choice but to walk away. So, as I say, my relationship with the band was never a problem."

Asked if there was a positive and relaxing vibe between the musicians before and during the event, Les said: "Yeah, it was quite an occasion, obviously. The show was on a Saturday, the 5th of November, and we had a rehearsal on the Thursday. So there was a break in between. We had a very limited time slot — about eight minutes, I think it was. 'Cause originally we weren't actually supposed to be performing. We were just there to accept the award, and that was it. There are two categories: the 'Performance' category and the 'Musical Excellence' category. And they put us in the 'Musical Excellence' category, which means you don't always have to perform. But something happened in between, and they decided we should perform. They gave us that limited spot of eight minutes, so we decided the best thing to do was to put a medley together of three songs. So we opened up with 'You've Got Another Thing Comin'' into 'Breaking The Law' and then 'Living After Midnight'. So those were the three songs we played. The thing is it was all over in a flash. When you're up there, the time just goes really fast. And we all had a little acceptance speech to do."

The 74-year-old Binks went on to say that the current members of PRIEST were "staying at a different hotel" from him and Downing, "so we didn't get to spend a lot of time together. We mostly saw them at the venue, the Microsoft Theater, when we had the rehearsal," he said. "And backstage, we socialized more then. On the night of the performance, you can imagine it was hectic. And the security there is amazing. I mean, it's like going through an airport security system. And they also have sniffer dogs, so it was really very tight on security. Alice Cooper inducted the band, gave a little speech. They showed a five-minute video of the band's career, from early days up to today. Then we did the performance and accepted the awards and made a little speech. Apparently the speeches are all being edited down to [very little]. But I kept mine very short and sweet anyway, 'cause I knew it would be edited. So I got straight to the point, so there shouldn't be too much editing in mine. I'm not sure about Rob [Halford, PRIEST singer] — he and Glenn [Tipton, PRIEST guitarist], they spoke the longest, so theirs will be edited down quite a bit."

After the release of "Unleashed In The East", Binks exited PRIEST and was replaced by ex-TRAPEZE member Dave Holland. Les later told Downing's official web site that the making of the live album "caused a rift between me and [PRIEST's] manager and ultimately led to my decision to leave the band. I just didn't see the point in continuing to work with a band whose manager didn't want me to receive any payment for that live album. A completely ludicrous scenario. It's a classic heavy metal live album which I believe eventually went platinum and he didn't want me to receive a penny for it. Crazy fucker!!! But that's what happens if a band allows someone like that to manage them — they lose members. So exit drummer number four."

Three years ago, Binks told Metal Rules that he understood how Downing's disparaging comments about his former bandmates in the press made it more difficult for K.K. to rejoin PRIEST in time for the group's 50th-anniversary tour.

"When I met up with K.K. [after not being in contact for many years], it sorts of altered my impression of him because I thought he was actually quite more accommodating and easy-going and it was a pleasure to be in his company," Binks said. "And I understand exactly his attitude about the relationship with Glenn, and Glenn is the dominant character in that setup. And how frustrating that must have been for K.K. because he had to put up with that for many years. But I also know one thing: I got on fine with Glenn. I like Glenn. I like them all, and I always thought they were all nice guys. So, I feel that the band as a unit on what they achieved, and throughout the entirety of their career right up until now. The last album, the 'Firepower' album, did really well. So, I think as a unit, and as an entity, it's bigger than any one of them. Do you know what I mean? Even Rob's career, when he went solo, it didn't exactly hit the heights of success that he would have liked."