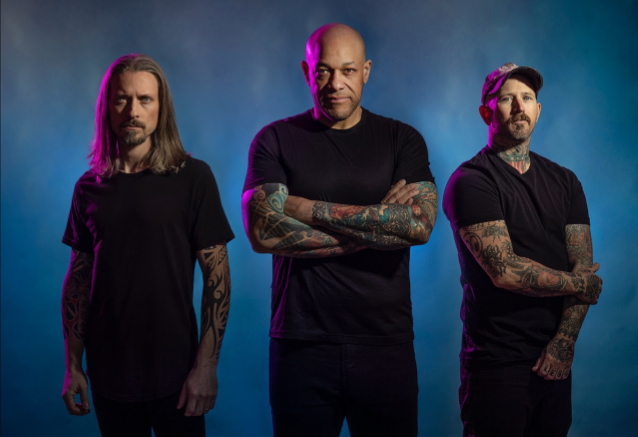 LIGHT THE TORCH — Howard Jones (vocals),Francesco Artusato (guitar),and Ryan Wombacher (bass) — will release its second full-length album, "You Will Be The Death Of Me", on June 25 via Nuclear Blast.

The band has dropped the official visualizer for the LP opener "More Than Dreaming". Check it out below.

"I love starting the album with 'More Than Dreaming'," says Jones. "It's got great energy and bounce to it — exactly what you want as an opener. We are looking forward to playing this live. The wait is almost over!"

The visualizer is a three-dimensional version of the album artwork. Both the visualizer and album cover were created by Artusato.

"The idea for this artwork started developing in my head right after we were done with the first session of pre-production," Artusato explains. "I started seeing certain colors and this style in my head. To me, the music on this record in fact sounds like 'those colors.' The concept is pretty simple: You can see a torch in the middle and three flames coming out of it. The three flames represent the three of us. The addition of neons and fog was inspired by John Carpenter's '80s movies."

He continues: "Having all the artwork created in 3-D, I was able to place it in a CG environment, start animating some of the elements, and create some sort of story. I think in this case it works well with the 'dream-like' vibe of these visuals. Artwork and visual creativity have been a big part of my growth as an artist for the past few years and I love to be able to combine music and visuals in one project. It made this album even more special to me."

Last month, LIGHT THE TORCH dropped the video for the first track, "Wilting In The Light", which was directed by Ramon Boutviseth in Los Angeles.

"'You Will Be The Death Of Me' has been a journey — even without the pandemic," said Jones. "This album has been emotional and rewarding in every way, and we couldn't be more excited to finally release it. Maybe there was a bit of desperation writing and recording these songs."

He shared: "Going through personal turmoil and watching Francesco deal with injuries, we knew this could change things drastically for us. The album was a welcome distraction, and we dumped every emotion we had into 'You Will Be The Death Of Me'. To watch Fran heal and become an even more complete artist in front of my eyes has been amazing to watch. Everything we went through individually and together with this album drew Fran, Ryan, and I together. I couldn't be more proud of this album knowing I made it with my family."

Artusato opened up about his experiences, saying: "This record is special to me in a different way. From writing the music during one of the toughest times of my life while dealing with a bad injury due to a car accident to being obsessively involved with every aspect of its production, recording, and creating the artwork. It's hard to describe how I feel, and to finally see this record getting ready to be released."

He continues about the redemptive power of the album, offering: "We are all very satisfied with how this record showcases the evolution of our band and our evolution as individuals. Without our brotherhood, this music could not have happened. Music is what kept us strong together during our toughest times. There's nothing like art that expresses pure and deep emotions, and that's what I feel when I listen to Howard's performance on this record."

Wombacher concurred: "I think this album shows the growth the band has experienced after years on the road together, and a friendship that has continued to thrive doing what we love together."

The guys returned to Sparrow Sound in Glendale, California to once again work with the production team of Josh Gilbert and Joseph McQueen (BULLET FOR MY VALENTINE, AS I LAY DYING, SUICIDE SILENCE). This time around, they also welcomed WHITECHAPEL's Alex Rudinger on drums. "He's incredible," said Artusato. "He was exactly what we needed."

Upheld by head-spinning seven-string virtuosity yet anchored to skyscraping melodies, LIGHT THE TORCH crafted 12 metallic anthems, including an unexpected and awesome cover of the '80s hit "Sign Your Name" by R&B singer Terence Trent D'Arby.

"You Will Be The Death Of Me" track listing:

The group shot out of the gate as a contender on their full-length debut, "Revival". It bowed at No. 4 on the Billboard U.S. Independent Albums chart and at #10 on the Hard Rock Albums chart in addition to receiving acclaim from Revolver, Outburn, and many more. "Calm Before The Storm" racked up a staggering 14.5 million Spotify streams, while "The Safety of Disbelief" remains one of SiriusXM Octane's all-time most requested songs. They also crisscrossed North America and Europe on tour with the likes of TRIVIUM, AVATAR, IN FLAMES, ICE NINE KILLS, KILLSWITCH ENGAGE and AUGUST BURNS RED, to name a few. 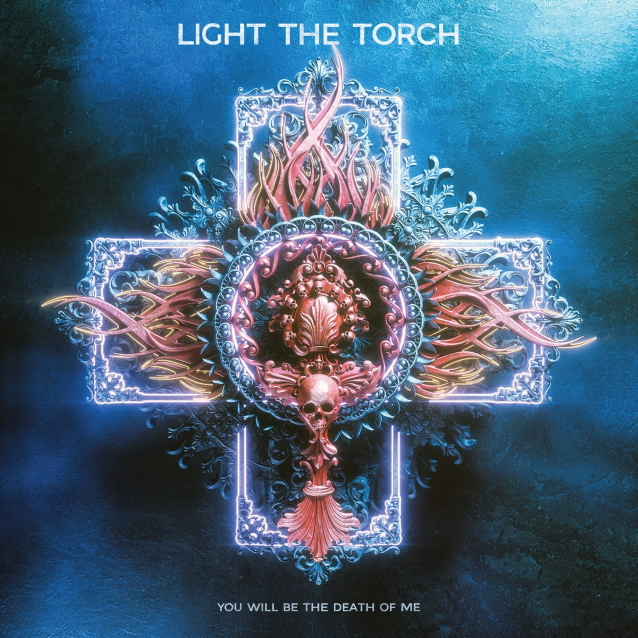