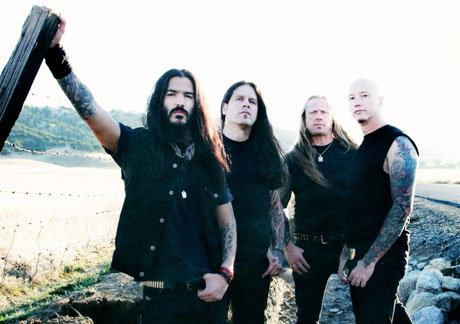 MACHINE HEAD Covers FOO FIGHTERS, SYSTEM OF A DOWN At 'Secret' London Show

TEN TON HAMMER, the famed MACHINE HEAD "cover band" that looks and sounds exactly like the real thing, played its first London show in ten years last night (Wednesday, June 6) at King's College. Fan-filmed video footage of the performance can be seen below.

Fans will be given the unprecedented opportunity to influence MACHINE HEAD's setlist. Commemorating the 20th anniversary of the band's first-ever live performance at their roadie Mike "Scum"'s getting-evicted-from-his-house party — for which they performed five songs — the band will give Bloodstock ticket holders the opportunity to vote for the five "Burn My Eyes" songs they most want to hear MACHINE HEAD play during their headline set Saturday night, with the five that receive the most votes included in the set list (details to follow).

MACHINE HEAD recently announced plans to film a video for the song 'Darkness Within' in the Czech Republic. The track comes off the band's new album, "Unto The Locust", which sold more than 17,000 copies in the United States in its first week of release to land at position No. 22 on The Billboard 200 chart — putting MACHINE HEAD in the Top 25 for the first time in the band's 17-year history.