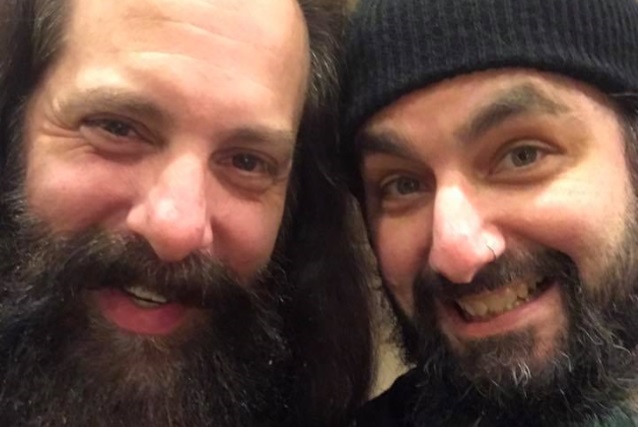 Ex-DREAM THEATER drummer Mike Portnoy has posted a photo of him apparently hanging out with his former bandmate, DREAM THEATER guitarist John Petrucci.

Mike told Loud that he left DREAM THEATER because he wanted to expand his musical horizons. "[I didn't] want to go to my grave and just be the drummer from DREAM THEATER," he said. "I knew there was way more to what I had to offer."

He continued: "Mike Mangini really helped us to get through a major bandmember change, and in a way, that was probably as smooth as any bandmember change could have gone. The way that he came in, his personality, his skills as a drummer, his background, his history… it clicked to the point where it was, like, if we would have met Mike [Mangini] twenty years ago, we would have been playing with this guy. If I would have grown up with him, I would have been friends with him jamming. And that's rare. It's rare to do that one time around."

Petrucci added: "You know so many musicians in bands that are having trouble finding people to play with, and who click, and so the fact that this happened with Mike [Mangini], it's really just amazing to us. And since he's been in the band, we've done [three] albums, [several] world tours and, thankfully, have had a lot of success with it, and a lot of support from our fans through all of it. And, again, I wouldn't have done anything differently. It's really amazing."

Portnoy has just completed a tour with his SHATTERED FORTRESS project, with which he performed DREAM THEATER's "12 Step Suite" in its entirety for the first time ever. The music documents the drummer's battle with alcoholism, and is an ensemble of five songs recorded by DREAM THEATER from 2002 to 2009, with titles that reflect his struggles: "The Glass Prison", "This Dying Soul", "The Root Of All Evil", "Repentance" and "The Shattered Fortress".