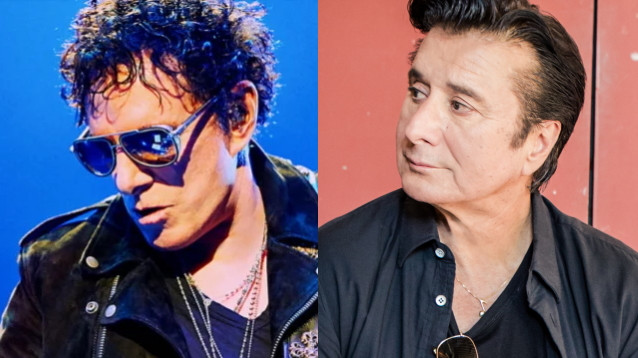 NEAL SCHON On Former JOURNEY Singer STEVE PERRY: 'We're Talking And Getting To Know Each Other Again'

In a new interview with Vulture, JOURNEY guitarist Neal Schon was asked to recount his most endearing memory of the band's former singer, Steve Perry. He said: "We were very, very tight. We're talking and getting to know each other again — though not trying to get together musically again, but he's learning who I am now, through a portion of our business that I'm kind of controlling now. I'm talking about a JOURNEY trademark that I've obtained, as we've never owned our own trademark. All these years, many people lied to us. My wife and I finally got to the bottom of it after investigating for years. We were fought hard by everybody, but we managed to obtain the trademark. So we're talking about that and figuring out the future of that, but we're talking.

"I have great memories of when Steve and I first met," he continued. "We hung out all the time, man. We were like brothers. We were crazy. We spent a lot of nights out way too late doing things we shouldn't be doing. Drinking and whatnot. We overindulged in a lot of stuff. But bottom line, we had a really good time for many, many years. Lots of enduring moments onstage and offstage. He was a really funny guy. I saw a fraction of a moment of it when we got together before the Rock Hall Of Fame induction. I managed to get into his room, which was locked down like Fort Knox. We had a good hang in there. I felt like I still knew this guy and we were still really great friends.

"I felt good about what was going to partake on the stage," Schon added. "He was always invited to come and perform at the ceremony, but he declined to do anything besides a speech. I understood why. During that induction, when certain individuals went up and took a really long time with their speeches, there are a few pictures that you can find where I'm talking into Steve's ears and he's laughing like hell. Some people like to feel like they're more important because they have to talk longer. Or they feel like they don't get the attention they need so they want to talk longer. So, that's my long way of saying that I hope that we can become even better friends in the future."

Schon previously discussed his relationship with Perry during a June 2020 appearance on "The Eddie Trunk Podcast". Asked why he thought Perry hadn't made any live appearances in support of his latest solo album, 2018's "Traces", he responded: "I am as clueless as you are. I thought for sure there was hope he would be out there singing, and I was excited for him. He's been not out there for such a long time, I was happy to see him put out a solo record, and signs said he was gonna get back in it. I was all behind him to do that — not for my own benefit; for him and for the fans.

"Somehow, things always get twisted to where I'm trying to take advantage of somebody, and it's really not the issue at all. I am a true friend of his, whether he knows it or not," Neal continued. "And I get the feeling, when I'm trying to talk to him, that he thinks that I just want something. I don't want anything. I just wanna support him, to show him respect for all the great years that we had. And that's it — simply, that is it."

"What I did notice is that when he first came out and started doing the very first interviews [in support of 'Traces'], he had a lot to say about him and I, and it was all very positive, what he was talking about — our friendship and what we wrote together and what he cherishes in his heart. And then things dramatically changed, whether it was edited out by higher-ups or whatever, but it went from completely one way to another. I was, like, 'Wow! That's just too bad.' Because he was being honest, and he was telling everybody how he felt. And then it seemed like somebody had clamped down on him and said, 'Don't talk about it.' Which I've seen a lot in all the years that I've been in this industry, and I just know what goes on behind the doors, and there's a lot of politics.

"I still wish him the best. And I'm still here at home. If he's up here in the Bay Area and he wants to have a coffee or come in and check out what [then-JOURNEY drummer and producer] Narada [Michael Walden] and I are doing [in the studio], the door is open, always. In the meantime, I'm gonna be recording and moving forward.

"I have no idea why he wouldn't wanna sing or at least even go on TV and promote his record, if he doesn't wanna do a tour," Schon added. "I can understand that. But take advantage of the late-night shows and go play, at least."

Back in October 2018, Perry told Rolling Stone that he couldn't imagine working with Schon in any capacity again or even re-establishing their friendship.

The singer made his comments in response to Neal's frequent public calls for a renewed collaboration.

"I'm not sure that's possible without stirring up hopes of a reunion," Perry said. "Please listen to me. I left the band 31 fucking years ago, my friend. You can still love someone, but not want to work with them. And if they only love you because they want to work with you, that doesn't feel good to me."