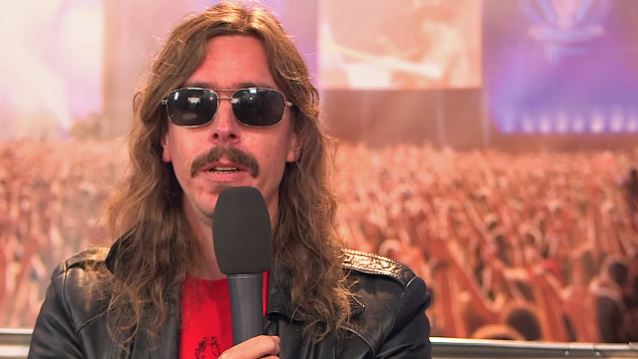 OPETH's MIKAEL ÅKERFELDT: 'I Didn't Know The Metal Scene Was So Conservative'

Arte conducted an interview with guitarist/vocalist Mikael Åkerfeldt of Swedish progressive metallers OPETH at this year's edition of the Wacken Open Air festival, which is taking place this weekend in Wacken, Germany. You can now watch the chat below.

Speaking about his early musical influences and the evolution of OPETH's sound, Mikael said: "On a very early stage, I was interested in progressive rock, because it was a form of music that I had never heard, really. I didn't know it existed until I started digging around the record shops and stumbled on bands like KING CRIMSON, YES and GENESIS — those types of bands. And that's also where I found my own voice, so to speak, my own kind of musicality. Even if I was a death metalhead, or a metalhead, something clicked with me with that type of music, because there was no limitations. And that's the way I like it, if you know what I mean."

He continued: "I think limitations on music [are] ugly and wrong. And I didn't know the metal scene was so conservative, but it really is. But we have been struggling… We certainly haven't been an overnight sensation, this band — we did things and people were, like, 'What are they doing? Why aren't they heavy all the time?' But that doesn't really have anything to do with music for me. I love the heavy stuff, but I also love the soft stuff and the complicated stuff and the simple stuff. So I want everything in… I think it kind of makes sense."

Mikael added: "I made the choice a long time ago to be a musician and to put all my energy into being a musician, and I don't wanna restrict myself because we're supposed to fit in somewhere. So progressive rock, and the kind of discovery of progressive rock, helped me, like I said, to find my own style, and to this day, I still think that we have… We're pretty much on our own. There's other bands who are progressive, so to speak, but I think we're on our own, which I like."

Asked for his opinion about some OPETH fans' position that Mikael should have started a side project under a new name instead of taking the band completely away from the death metal-tinged sounds of OPETH's early albums, Åkerfeldt told Lady Obscure: "Well, I mean… It doesn't really work like that, does it? First and foremost, people can have their opinions. It doesn't mean we'll follow it. We love our fans, [and] we respect them, but we're a band first and foremost. I never felt that… Whatever we do with this band, whatever ends up being OPETHisOPETH, because it's us. And that argument kind of fails in that sense… How does that work with Joni Mitchell [or] David Bowie? For solo artists who have a sound. Should they change their name? It's just a random and, I think, a bit ignorant and stupid comment, to be honest. I think it's easier if [the fans] just stop listening to it. I think the best solution is that they stop listening to it if they don't like it."